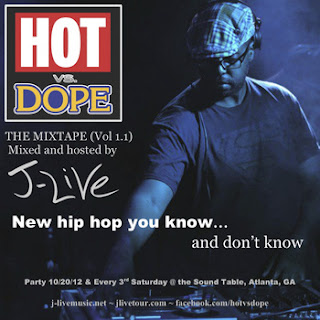 Shit, there's so much dope shit coming out today, while some days carry absolutely nothing of interest; luckily I'm at home for the majority of the evening since I'm pretty drained after an amazing night yesterday, due to an unbelivable concert headlined by Bumpy Knuckles and DJ Premier.

J-Live is known as the Triple Threat; the emcee, the producer and the DJ. While we often hear him laying cuts on his records, the DJ part of his T.T. persona is the least explored, so this mixtape is more than welcome. The first installment in "HOT vs. DOPE" features a great mix of some of 2012's finest records, some that are most likely on constant rotation for many of y'all, while some you might have missed out on completely (I know I have despite high profile songs). With 31 tracks, this is a good run down of 2012 so far and should warrant at the very least one thorough listen. Well done J!
Posted by lost.tapes.claaa7@gmail.com at 3:06 PM