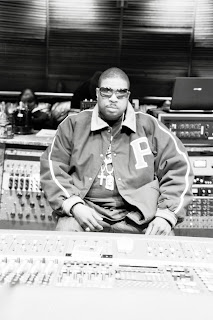 There's no secret that I hold Diamond D in the higest regard as a producer; despite some clunkers I'd still place him among the top 5 beatmakers of all time, and much of his recent work has been a true return to form. We haven't had an official producer album from him in years; "The Huge Hefner Chronicles" largely failed because it focused on Kirkland rhyming over other peoples' beats, when the reason people buy a Diamond D album is his excellent work behind the boards.

He has now completed "The Diam Piece" LP, which is chock full of amazing guest features on as well as all tracks, minus the recent solo single "Deflate Ya" which makes me believe that he's putting the majority of his focus on the arrangements and musical aspects this time, while leting his A-list associates handle more of the vocals. Either way, this looks absolutely mindblowing (finally, an OC / Diamond collabo, and it's great that the criminally overlooked "The Time Is Now" is given a home). No release date yet, but check Diamond's Tumblr for more info, and I will too of course pos any further news that pops up. Shouts to KingKaronz for spreading the word!