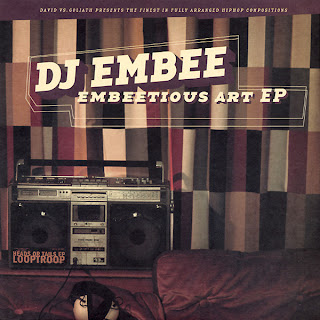 "Embeetious Art" is a particularly ill extened play vinyl by the great DJ Embee, who, in case you don't know, is the DJ and producer for LoopTroop. The majority of the EP is made up of instrumentals designed to hold the listeners interest without the help of a vocalist. Instead the focus is on deep, heavy basslines, saxophone parts, cuts, guitar licks and such. The only exception to this rule is "Magnetism" which features a couple of verses by Promoe and, without breaking up the flow of the music, the vibe is very reminiscent of LoopTroop's "Modern Day City Symphony" which to me is the Troop's only true classic although they made alot of good music since. If you're a fan of heavily jazz-influenced hip-hop instrumentals you'll love this one, it's a bit reminiscent of Pete Rock's "PeteStrumentals" since it has that same jazzy, late night vibe with alot of bass, sax lines and scratches plus of course the fact that it's an instrumental record with an MC part on it. Besides Promoe, the guest features are instrumentalists - Jonas Filling plays sax on "Stay Up Late", John Grahn adds guitar to "Semester" and there's some really nice atmospheric background vocals provided by someone called dad & mum. The record was released on LoopTroop's own David vs. Goliath imprint in the year 2000 and has not been reissued since.This is perfect chill-out music for any given Sunday, so enjoy y'all!
A1. "On Tour"
A2. "Magnetism" (Ft. Promoe)
A3. "Another Poor Lonesome Homeboy"
B1. "Egotrippin' Pt. 4"
B2. "Stay Up Late"
B3. "Semester" (Ft. John Grahn)

DJ EMBEE - "EMBEETIOUS ART EP"
Posted by lost.tapes.claaa7@gmail.com at 3:49 AM