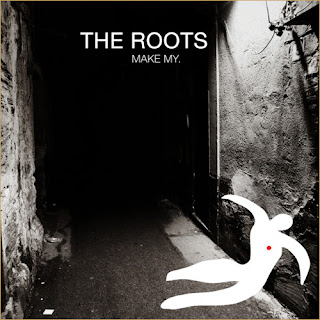 Great news that The Roots are releasing their next official studio album on December 6. I would be suprised if "undun", which is said to be a concept LP (see below), doesn't turn up to be one of the five hottest albums of the year. The first single just dropped and is called "Make My." and also features Big K.R.I.T. on guest vocals. Check out the tracklis, stream the joint and stay tuned for further news on the project...
"undun is an existential re-telling of the short life of one Redford Stephens (1974-1999). Through the use of emotives and Redford’s internal dialogues the album seeks to illustrate the intersection of free will and prescribed destiny as it plays out ‘on the corner’. Utilizing a reverse narrative arc, the album begins as the listener finds Redford disoriented–postmortem–and attempting to make sense of his former life. As he moves through its pivotal moments he begins to deconstruct all that has led to his (and our own) coming undun."

The Roots "Make My" featuring Big K.R.I.T. by okayplayer
Posted by lost.tapes.claaa7@gmail.com at 3:02 PM

Email ThisBlogThis!Share to TwitterShare to FacebookShare to Pinterest
Labels: The Roots