Immortal Technique - "Toast to the Dead" 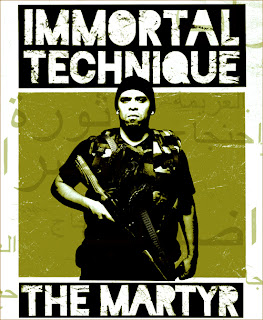 Immortal Technique sends out a toast to all the fallen brothers on this great new track from an upcoming free project called "The Martyr". The music is apparantly produced by J Dilla but as big of a JD head I am, I can't recognize this beat; it's perfectly suited for the theme of the song though. Other collabos on the upcoming album will include Brother Ali, Styles P, Joell Ortiz and DJ Green Lantern who also laid down the cuts for "Toast to the Dead".
IMMORTAL TECHNIQUE - "TOAST TO THE DEAD"
Posted by lost.tapes.claaa7@gmail.com at 2:08 AM