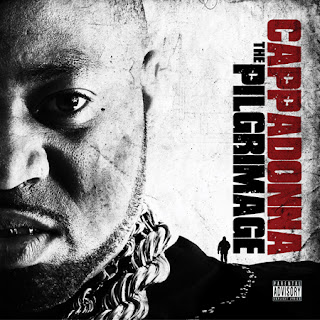 Wu-Tang Clan's semi-official tenth member, Cappadonna a/k/a Cappachino, is gearing up to release his sixth full-length album. "The Pilgrimage" will be released on CD through Fat Beats on November 15, a vnyl release might appear some time in the future as well if the CD does well. If the music on here is anything like the Phantom Of The Beats laced first single, "Cuban Link Kings", this could very well be Cappa's greatest album in a long time. According to the press release, Cappa is about to return with a venegance with the sound his fans have told them they want to hear from him. The album is said to very much be a return to the classic Wu sound, not unlike what Raekwon did with "Only Built 4 Cuban Linx Niggas Pt. II".
Well, we will see how dope this LP actually will turn out in the end, but the first single promises great things both from a lyrical and production point of view. The feeatured Wu affilliates on "The Pilgrimage" comes from Inspectah Deck and Killa Bee Solomons Child (formerly Killa Bamz) while some lesser known artists like Matlock, Cheeda Bang and Killer Black also joins Cappa on some records. Check out the tracklist and at the bottom of the post you'll find a link to "Cuban Link Kings" in case you missed it the first time i posted it. You can pre-order "The Pilgrimage" @ UGHH (tpeace to Jammin).
01. "A-Alikes, B-Alikes, C-Alikes"
02. "Dart Imports"
03. "Energy Guard"
04. "Hoody Hoodpecker" (Ft. Killa Black & Matlock)
05. '"Good Wine" (Ft. Cheeda Bang)
06. "Put God Fire" (Ft. Inspectah Deck & Solomon Childs)
07. "Hold On"
08. "Honey's Look Goos" (Ft. Inspectah Deck)
09. "For You" (Fr. Killa Black)
10. "Friendemies" (Ft. Chedda Bang)
11. ´"Can’t Believe It’s Him"
12. "Cuban Link Kings"
13. "Trials & Tribulations" (Ft. Killa Black; Elite)

CAPPADONNA - "CUBAN LINK KINGS"
Posted by lost.tapes.claaa7@gmail.com at 2:30 AM