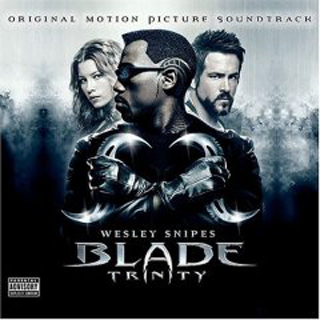 Prince Paul, was at one point a mentor for a young aspiring producer who would come to be known to the world as Prince Rakeem / The RZA. Besides Paul himself, Rakeem would turn out to be the most original, creative and diverse producer to ever emerge from the american hip-hop scene. Much like Stanley Kubrick's films, RZA made something as rare as "art" with a huge commercial appeal, with every album he produced between '93 and '98 all going at least platnium in the states while also being hailed as masterpieces. From his intense production work, that often featured a cinematic quality and heavy on themes and musical symbols, Rakeem would go on to find a deep interest in film music. His first step on that path came when he was offered to score all music for Jim Jarmusch's cult classic "Ghost Dog: The Way of the Samurai" (1998); a movie praised by both fans and critics for its visual elements, original story, and musical cues. The experience gave Wu-Tang master hunger for more which would translate to several film scores, and compiling of soundtracks, .including work on "Kill Bill Vol. 1" (2003) and "Vol. 2" (2004), "Soul Plane" (2004), and "The Protector" (2005).

RZA was also hard at work composing some of the music for the third installment of "The Blade" saga with Wesley Snipes. The soundtracks to the previous flicks in the series has been pretty consistant quality wise with a vast fusion of different musical genres, featuring artists such as Gang Starr, M.O.P., DJ Krush, Junkie XL, Cypress Hill, Roni Size and many others; mixing up hip-hop and electronica acts. For "Blade Trinity", the concept was a little different however, with more classic hip-hop joints for the first four tracks - RZA's section of the soundtrack. These tracks together form a brilliant little EP, once again showing that RZA's best tracks often comes when working on film music these days. Just take the unbelivably ill "Fatal" that kicks off the show. Here, the producer incorporates elements of classical music through the use of a strong string section, which, when added to knock out drums and an eerie bass line, creates a true masterpiece that works perfectly as the theme for the movie as well as a stand-alone piece. RZA rhymes from the perspective of the Blade here, who is of course a vampire, putting all of the characters anger and emotions on his sleeve, creating a style that reminds me of his classic verses on Gravediggaz' "Niggamortis" LP.

The remaining songs are all of high quality, with verses from the late Ol' Dirty Bastard, Raekwon, Ghostface, E-40, WC, Christ Bearer, and Lil' Flip all sounding right at home over RZA's diverse productions. Each song stands on its own and you can tell there was a lot of thought and work put into each; brilliantly arranged and then mixed, knocking beats, a haunting moody melody for Black Keith and ODB, or an up-tempo bouncy club banger for Lil' Flip and Rae & Ghost. The lyrics also often ties in well with the movie's themes, bringing out quality work from all involved. As an EP I strongly recommend this, although the 18 minutes really makes one wonder how powerful the album would've been if RZA had been allowed to produce the entirety of it.

One last thing - the last song on here (track #5) is called "Daywalkers", which is a co-production between RZA and German film composer Ramin Djawadi. This 2 minute piece is not a hip-hop track at all, though it does feature additional vocals by frequent Wu-Tang collaborator Suga Bang, but more in the vein of electronica. It does manage to show off RZA's diversity and overall it's not a bad composition at all, though it does feel very off in the context of this EP. I did decide to include it anyhow, keeping the five first songs from the soundtrack intact, which is all of RZA's work featured there. Enjoy and TURN IT UP!! A LITTLE LOUDER!