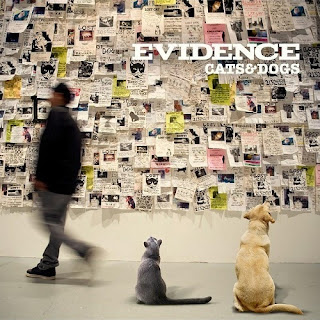 Evidence's "Cats & Dogs" hit the store shelves on September 27, but even though I pre-ordered I didn't get my vinyls until yesterday. Easily worth the wait though, from it first leak til' today, I can't count how many times I've banged it out from beginning to end so the replay value is ridiciolous. There's not a skippable song on here, production is extremely solid with appeal to any Dilated Peoples fan while being a little darker than usual in nature. Evidence is one of the rare emcees who seems to get better by every year and "Cats & Dogs" is probably his finest lyrical hour yet in my opinion. Besides great music, the packaging of the album is something out of the ordinary too; included is a big Evidence poster and both vinyls are coloured in bright yellow and pink, respectively. Well worth the money, please support quality!
As is usual in this day and age, Ev's new album has also been made available as a digital deluxe edition exclusive to iTunes. This version features the same 16 songs but also includes three exclusive bonus tracks, making the album over 70 minutes in length. All of these songs are on some great hip-hop shit, and not suprisingly similiar in style to the rest of the tracks found on the LP. While they are not amongst the best material on "Cats & Dogs", they are all certainly ill and worth hearing. Therefore I think it would be a shame if peeps who bought this on wax or compact disc would miss out on these three gems. "Sleep Deprivation" is a sinister cut about battling insomnia caused by a harsh reality with yet another beat supplied by The Alchemist. The Statik Selektah produced "Good Times" is essentially the opposite of the previous one, a lighter, mellow piano driven song featuring beautifully sung female vocals with Ev giving a different flip on the popular theme of good times in life. I'm not even sure if the final track, "Same Folks", is actually included on the official iTunes release but if it's not, it definitely should be, so I added it. The song is produced by DJ Babu and features the West Coast prodigy, Fashawn - two people I always like to hear in combination with Ev. Aight, enjoy the bonus tracks in mp3 format (plus the digital booklet) for free @ The Lost Tapes.
18. "Sleep Deprivation" [*]
19. "Good Times" [*]
20. "Same Folks" (Ft. Fashawn) [*]