Funkmaster Flex used to drop some real hot shit back in the mid-'90s and the three "60 Minutes of Funk" tapes are more than enough proof of that. Featuring both popular tracks of the day, freestyles and self-produced exclusives, these tapes still stands out as a great representation of New York's hip-hop scene in the 1990's. One of the illest track off the first volume (1995) is the single "Loud Hangover" which features Sadat X and Akinyele killing a crazy raw Flex production. I love how sick these guys sound together since they both have such distinctive voices, I could seriously hear a whole album with these two. An alternative version titled "The Allstar Remix" was also released as a separate single. I included that version as well since it's a real cool and different take that I think some of y'all will appreciate. The remix features the beautiful voice of guest vocalist Yvette Michele and were remixed by R&B-producer Allstar a/k/a Allen Gordon. 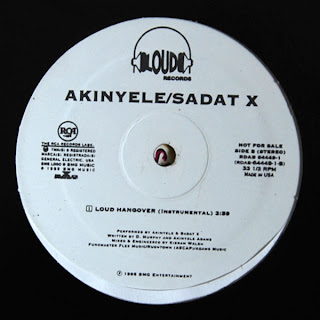 AKINYELE / SADAT X - "LOUD HANGOVER"
Posted by lost.tapes.claaa7@gmail.com at 2:36 AM