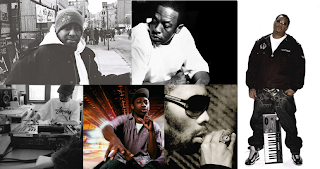 A while back Focus, one of the in-house producer for Aftermath, released a series of homage joints for some of his favorite producers. For these tracks he created beats using  respective elements that these legendary beatmakers and musicians are known for, and in my opinion he really pulled it off. There's definitely a "Focus vibe" to all the songs too however, so there's not a case of straight taking the styles of these guys. There was plans at one point to release an entire album worth of these type of homages but the project was scrapped and instead, Focus leaked seven of the records for free.
Included are dedications to RZA, DJ Premier, Pete Rock, Dre, Ali Shaheed/Tribe, Dat Nigga Daz & Soopafly plus Dilla and guest emcees includes Crooked I, Royce, Von Pea, Cilvaringz, Slum Village, Kurupt, Ras Kass, Kendrick Lamar and many more.This is something I've been revisiting lately and thought it was ill to have them all collected so if anyone missed out on some of these before or just want to listen to them like an EP, enjoy. Oh and save the "this shit is old" comments cuz I'm aware ... Thx to Beathearts for the image above.
01. "Homage to DJ Premier" (Ft. Royce Da 5'9", Phonte & Stat Quo)
02. "Homage to Dilla" (Ft. Slum Village, Frank Nitty & Illa J)
03. "Homage to Daz & Soopafly" (Ft. Pro-Verb, Ras Kass, Kendrick Lamar)
04. "Homage to Dr. Dre" (Ft. Crooked I, Jay Rock, Kida &  Marsha Ambrosious)
05. "Homage to RZA" (Ft. TheFEW, Cilvaringz & Blue Raspberry)
06. "Homage to Ali Shaheed Muhammad" (Ft. Von Pea, Donwill & Chaundon)
07. "Homage to Pete Rock" (Ft. Kurupt, Sha Stimuli & Rapper Big Pooh)