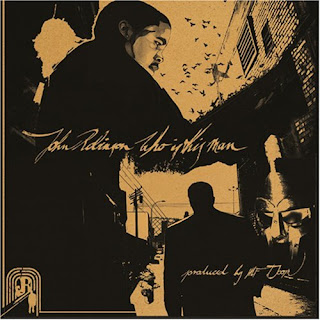 Every now and then, you manage to find an intriguing album from a number of years ago that you somehow overslept on. And it’s always a blessing when that happens! Such is the case for me with “Who is This Man?”, the 2008 album by an emcee named John Robinson. And that’s a pretty damn legit question because I can’t recall ever hearing about this guy before or after but the proof is in the pudding as this man clearly packs skills on the mic. His voice is quite high in vocal tone and he sounds like something between Roc Marciano and MC Paul Barman. The influence from MF DOOM is also easy to spot as he has got a knack for spitting bars heavy on the multies and displays a similar twisted sense of humor in his rhymes. The album is also full of voice skits with various (sampled) people discussing John Robinson’s character, most of the times set over sick instrumentals.
Therefore the choice of picking nothing but beats from the masked Super Villainz’s “Special Herbz” series comes off as perfect logic and works out great, with Robinson sounding natural spitting over these amazing instrumentals. Between this and Ghostface’s heavily praised “Fishscale” LP, tracks from that particular DOOM collection has been used a lot. There’s no question that DOOM was involved in this project, giving it his official stamp of approval, but I can imagine it being a little disappointing for those who were already well familiar with “Special Herbz”. Personally, that’s another release that I overslept on, which I will eventually get around too, but with so many rappers ripping these songs (Masta Ace is next in line), I am glad that’s the case for me. The only track that appears on both this and Ghost’s LP is the beat for “Indy 102” which was set to a song called “Jellyfish” on “Fishscale”. I never liked the latter and used to blame it on the beat, but Robinson’s version is a lot better and I believe the Ghost track was horribly mixed. 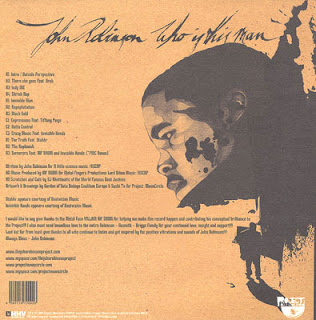 Production-wise, this album is vintage DOOM and extremely solid all the way through. The main influences comes from jazz and soul, most of the tracks have that smooth illness to them but topped with drums of death. Heavy bass-lines, latin percussion, acoustic guitars, sick cuts (performed by legendary DJ Rhettmatic), flutes, synths, keyboards and pianos all float in and out of the soundscapes and are put together with DOOM’s perfect sense of sloppiness. Robinson takes on the tracks with grace, as his voice and flow forms a perfect marriage with these tracks. It’s hard to imagine how he would sound over other styles of beats since this sounds so natural. There are some cool concepts on here too, besides the classic braggadocious rhymes, we gets to know who this man is through joints as different in concept and performance as “Shrink Rap”, “Invisible Man” and “The Truth” and ladies jams like the dope “There She Goes”. Robinson has no problem holding down an entire album by himself, I’ll tell you that much. There are a few guests appearing on here however, mostly DOOM affiliates that are little known outside of his various projects. We get a great verse from female rapper Stahr, a verse by someone called Invisible Handz and fitting vocals sung by Orah and Tiffany Paige on the two smoothest joints of the album. Even MF DOOM himself appears on the final (bonus) track, “Sorcerers”, and as expected this duo sounds like they potentially could form a group together; in other words, the chemistry on the mic is as visible as that between Robinson as MC and DOOM as producer.
“Who is This Man?” is a banging hip-hop album for certain, a truly great effort by a debuting rapper. John Robinson managed to take a batch of already existing instrumentals and make them sound as if they were custom made for him. It’s not a perfect LP, but there are really no weak spots, and with 13 tracks and a running time of 43 minutes, it never gets dull. I’m looking forward to hearing more stuff from this man and the word is that he also has a project out with Lewis Parker, another very dope producer so that will be interesting to say the least. You can purchase "Who is This Man?" on CD @ Amazon or UGHH although the LP seems to be out of print right now.