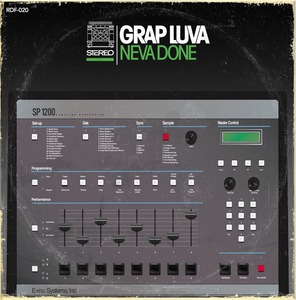 Grap Luva is finally preparing to release his first official release, "Work is Never Done", which is quite unbelivable considering Pete Rock's younger brother been ripping mics and producing heat since 1992. The EP will be released on both CD and wax via Splice-Of-Spice Records with executive production by Earl Davis for Redefinition Records; two of the most reliable underground labels of today. The record features a mix of Grap spitting heat over Damu The Fudgemunk's, Kev Brown's and Joc Max productions as well as some choice beats from his own SP-1200 archives.

The release date is set for the 4th of November but since it's a limited release, place your pre-order as soon as possible! The site put up for the release also includes links for streaming most of the songs on the EP, and below you can check out the banging ass intro, featuring Damu on turntables, that sets things off lovely for the project.
Work Is Neva Done - Grap Luva ft Damu The Fudgemunk by Redefinition Records
Posted by lost.tapes.claaa7@gmail.com at 2:22 AM