LAST EMPEROR - "Palace Of The Pretender" 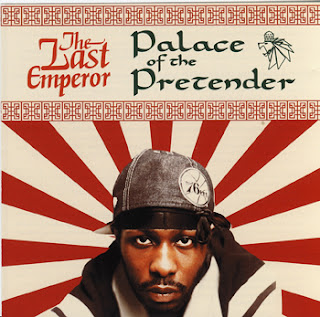 Not many rappers are ever able to see the amount of hype and praise without a debut album out as The Last Emperor did in the late '90s and early '00s. 12" singles and mixtape classics like "Secret Wars", "Echo Leader" and "Do You Remember?" clearly let the rap world know that Jamal Gray was far from the average emcee. The Philadelphia native has always shown a knack for weaving intricate stories and spitting no bullshit lyrics with more than enough charisma to capture the listener. Even Dr. Dre saw the potential and quickly signed him to Aftermath Entertainment, even having him ghostwrite a verse or two for "2001". The deal fell through while fans were stuck waiting for a proper album, only catching the occasional vinyl single on various labels including Rawkus, Hi-Rise and Final Hour.
Good things come to those that wait however, and in 2003 Last Emperor's real debut finally came out, although it's quite strange in many ways. I don't know the actual deal but the album was released in two different versions, on two different labels and with two different covers. The US market got "Music, Magic, Myth" on Red Planet Music/Raptivism while Penalty released "Palace Of The Pretender" in Europe. The music is farily the same but there are notable changes; for this post I will focus on "Palace..." since that is the superior version to me. I've heard people say that the 2003 album didn't represent Last Emp's raw skills in the same way as the earlier singles had done, but I'm inclined to disagree. All the things that made hip-hop fans across the globe take notice is on full display on this disc. There's plenty of heavy concepts and philosophical questions discussed on here, and the personal nature of the album is one of it's strongest points.
Many great rappers have fallen on weak beat selection but production supplied by Da Beatminerz, Prince Paul, Ayatollah and even house legend Armand Van Helden definitely shuts down that issue. Overall, there's no wack tracks on here, just press play and let the lyricism and soothing beats take over your mind for the coming hour. The biggest problem is that it's hopelessly out of print and I curse myself for not picking it up when I had the chance despite being a fan of The Emperor back then. I don't think I ever saw this in a used record store once since so I really hope this gets re-issued one day! Aight, enough talk, grab your download and TURN IT UP!!
01. "Tiger Trail" [prod. Ayatollah]
02. "Karma" [prod. Ayatollah]
03. "One Life" (Ft. Poetic) [prod. Set Free]
04. "Meditation" [prod. Da Beatminerz]
05. "Do You Care?" [prod. Will Veston]
06. "Shine" [prod. Armand Van Helden]
07. "The Incredible Man" [prod. The Resources]
08. "Let's Ride" [prod. Da Beatminerz]
09. "Hold On" [prod. Da Beatminerz]
10. "Single Mother" [prod. Da Beatminerz]
11. "The Great Pretender" [prod. Prince Paul]
12. "Here We Are" [prod. Da Beatminerz]
13. "The Drifter" [prod. Set Free]
14. "Clear Day" (Ft. Masta Ace & Trugoy) [prod. Prince Paul]
15. "Echo Leader" [prod. BooLuv]
16. "Secret Wars Pt. 1" [prod. Madsol-Desar]
17. "The Underground" [prod. Da Beatminerz] [Extra Bonus Track]

LAST EMPEROR - "PALACE OF THE PRETENDER"
Posted by lost.tapes.claaa7@gmail.com at 2:46 PM

Email ThisBlogThis!Share to TwitterShare to FacebookShare to Pinterest
Labels: Album, Last Emperor, Out of print