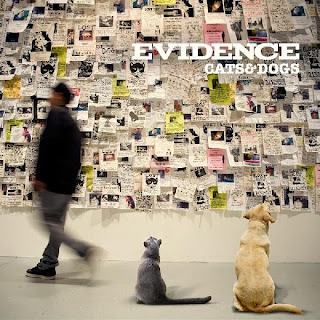 We are now exactly one week in to 2012 and there's still no doubt in my mind about what the best album of last year was. In a year when seasoned vet's like G Rap, Raekwon and Pharoahe Monch, favorite producers Pete Rock and Large Pro as well as debuting artists such as Saigon and Rasheed Chapell all dropped slamming LPs, Evidence's "Cats & Dogs" came out victorious through its stick-to-the-script formula.
Back in the hot summer months of 2011, the Dilated Peoples emcee known as Evidence unleashed his second full-length album on the world. And what an album it was! Both a very capable rapper and producer in his own right, for "Cats & Dogs", Ev took the wise choice to step down from the producer seat. It's not that he couldn't have laced sixteen dope instrumentals by himself, he has proved that capability too many times for that to be put in question, but this way he could put all his focus and energy into his vocal performances - And that extra lyrical drive shines throughout the entire set!

I always liked Ev as an emcee but I had never considered him as one of the true greats of the hip-hop game. Until this summer that is. I feel confident in saying that this is by far the LA spitter's best lyrical show-off yet, all solo works and Dilated projects counted for. His voice is clear and commanding, making it easy to snap up every line; yet, his writing is often riddled and complex, with an extended use of metaphors that makes repeated listening rewarding. The rhymer invites us into his life by sharing his thoughts and personality on diverse cuts like "The Linear Notes", "Fame" and "Well Runs Dry". On the two latter he, respectively, gives his take on success and glory and then the hardships of past days struggling with money to make it by. In this way, "Cats & Dogs" are a great introduction to Evidence for anyone new to his music as well as a way of further insight into his persona and style for those already fans. There's also plenty of concept tracks like the twisted love tale "I Don't Need Love" and the politically charged "To Be Continued" as well as classic battle rhyme styles on heavy joints like the straight-to-the-point collabo with Preemo,  "You". On the latter the L.A. rhymer spits raw shit like "One's a lonely number, two's the first loser; So how the fuck can you win? Become a drug abuser/ Slappin' these beats, I'm no snoozer; Six million ways to Die, go ahead and choose ONE".

As far as producers and guets on the LP goes you could say that it's an all-star jam at the same time as it's a family affair. Five of the fifteen songs are laced by The Alchemist who comes through in grand fashion with some of the best beats I've heard from him in years; a pretty bold statement considering his catalouge. Just check how well the paranoia inducing, speeding music he concorts for "Crash" connects with Evidence. Likewise, the gritty soundtrack Alc hooks up on the masterful opener "The Linear Notes" becomes the perfect vehicle for the rapper to bring it back to his come up and show the world he means business with one of the best verses of 2011. With the chemistry displayed on all of these collaborations, Alchemist is definitely the MVP of the producer's working on the project.
But just as Alchemist clearly was in a special zone when crafting for the album, so was every producer heard on the disc. For example, I never been big on the production duo known as Sid Roams but the three grooves they lay down here are dark, layered and absolutely perfect for Evidence. "Late For the Sky" is an especially big tune which, through the use of string-like keys, fat bass and harmonic vocals, is one of the more melodic tracks on the album. It's also one of four "posse cuts" where Ev puts his skill to the test against two other lyricists; the aforementioned one with Aesop Rock and Slug features fairly abstract verses from everybody involved. It's great that by using only a few tracks with several guests on, it gives us plenty of solo cuts with only the lead artist while also featuring many great emcees and songs that definitely stands out on a tracklist. How about the Evidence / Roc Marciano / Prodigy or Evidence / Raekwon / Ras Kass joints; both some of the sickest tracks released in 2011. Besides being great hip-hop joints, siding up with rhymesayers of this caliber also goes to show just how far Ev has come as a lyricist through the years. I also gotta give big props to Ev for keeping the DJ an essential part of his sound, something that's sadly way too often overlooked in hip-hop these days. Especially DJ Revolution, but also Babu and DJ Flash gets busy on the wheels of steel and it brings another layer to the final product and definitely helps bringing it home.

There's so much to love about this LP which, with about six months to show for it now, has tremendous replay value. With all the albums I reviewed of last year, as good as all of them still left a little room for improvement. Not so much with "Cats & Dogs"; there's no song I would have left off, no bad guest verses, no boring beats and Evidence's performance is remarkable throughout. I imagine much time was spent on overseeing the project to make sure every track fit together with the next and, in that way, giving it the  coherrent sound of one producer's work. One of the ways to achieve this is unmistakably the straight up hip-hop, stick-to-the-script formula that keeps the sound banging throughout. While this method might leave little room for experimentation, the foundation of  thumping beats, dope rhymes and masterful turntable work are a rock solid foundation for an LP that might very well be considerd a classic in a few years.
Posted by lost.tapes.claaa7@gmail.com at 9:56 AM