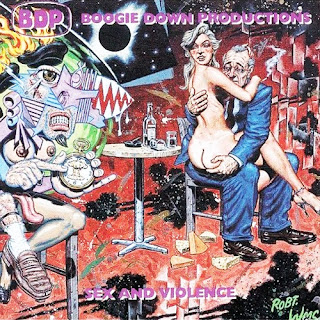 Without a doubt, "Sex & Violence" is by far KRS-One's most criminally underrated album. To me it might just be his best album ever mae, possibly tied with "Return Of The Boom Bap" and "Criminal Minded" was of course much more important impact wise but as far as the actual music goes, BDP's fifth album was a stronger effort booth lyrically and production wise. Unlike previous BP albums, KRS-One only laced the beats for a couple of songs while the rugged hardcore tracks was provied by great producers like DJ Kenny Parker, Pal Joey and even Prince Paul who contributed three songs to the project. You can read my extensive analysis of what makes the LP so fantastic in my opnion that I wrote a while back that also features a lil' EP of all "the B-sides" made around that time. .
In the recent Complex interview with Prince Paul the master engineer revealed that KRS contacted him and picked three beats for the album he was working on. Following that, he didn't hear anything from Kris until the record came out and his original tracks was on there but mixed by KRS-One and D-Square rather than having the original producer finish them. I love these three songs but i can imagine  that they would have been straight out of this world. Today Paul Huston continued his"unreleased series" on his Soundcloud page and today's featured song are Paul's original rough demo of "Drug Dealer" before the BDP crew mixed it down. It's not that different from the album version but it does have some previouslt unreleased material soi if you're a fanatic of BDP or Huston you will definitelt want ti hear this. Here's what the producer has to say abiut the making of the 91 song:
"This is one of a few songs I did for the "Sex and Violence" album. For reasons unknown I never got a chance to fully complete the production on these songs and thus poor mixes were ultimately released to the public. When I hear those songs [today] I cringe.. I do wish I could turn back the hands of time and finish these recordings . Hope you enjoy these . More to come on the unreleased Prince Paul Collection." - Prince Paul
"Drug Dealer" [Paul's Rough Mix '91] by B.D.P.
Posted by lost.tapes.claaa7@gmail.com at 5:52 AM