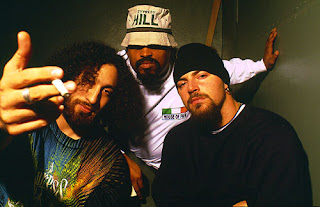 I haven't been able to hit you up with one of those Lost Tapes compilations many of y'all often request, but here is the first one for 2012. I've been listening heavily to Cypress Hill lately as they are one of my favorite groups of all time - the original Cypress that is, with DJ Muggs behind the boards, B-Real up front and Sen Dogg doing his thing (Eric "Bobo" is a cool addition too). Especially the first four albums are classic status in my eyes and although the later LPs haven't come close to that status there's always a bunch of gems on each that makes sure the group maintains their high level. The only one I was truly dissapointed in is "Rising Up", much because (to me) it is not even a real Cypress album considering Muggs is barely involved. Hopefully they will get back on track  in time for the next round since all the joints B-Real and Muggs have appeared on together over the last five years or so have been crazy.
For this compilation I basically wanted to put together a majority of the non album cuts by the group that I know of or have heard. At first I was thinking about making it a strictly 1991 to 1999 affair and including the "Soul Assassins" tracks but at the end of the day I figured that they got enough hot unreleased shit from '91 up to last year. Therefore this 18 tracks collection now reflects the group's musical evolvement over the years and showcases a bunch of different styles. You got the blunted darkness a´la "Temples Of Boom" ("Da-Da-Da", "Roll it Up, Light it Up..."), the funkiness of their breakthrough ("Shoot 'Em Up"), early rock collaborations in the form of the songs with Pearl Jam and Sonic Youth from the "Judgement Night" soundtrack as well as the synthesizer driven sound heard on "To Death do us Part" ("Ready to Die", "Roll it Up") and much more. I even decided to include the three DJ Muggs produced tracks from "Rising Up", simply because I consider that more of a type of side project and this way  I get to listen to these bangers in a real Cypress setting. All tracks on this sick ass "tape" are solely produced by Muggs except for "Scooby Doo" (T-Ray with Muggs on co-production), "Strike the Match", "Take My Pain" and "Pass The Dutch" (all three co-produced by DJ Khalil) and lastly the bonus track "Child of the Wild West" which is a production collaboration between DJ Muggs and Roni Size/Reprazent. So spark up a blunt, press play, lay back and enter the temples of BOOM. 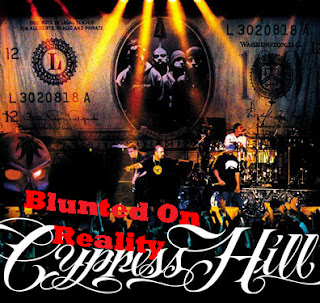 CYPRESS HILL - "BLUNTED ON REALITY"
Posted by lost.tapes.claaa7@gmail.com at 4:21 AM