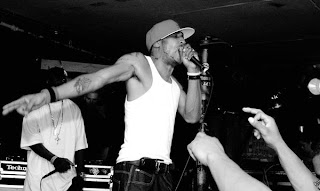 In 2006 the incredible emcee and producer known to the world as Lord Jamar took a step back from rocking with his producer in Brand Nubian and released his solo debut, "The 5% Album". A very solid release indeed, it clearly proved that Jamar was very capable of holding down a solo career. Six years later, it's now time for his second LP, to be titled "Known Associates" which will drop on the Universal Indie Records and has been in the works for years. Previously confirmed features include Sadat X, Cappadonna, Jay Electronica, Bun B, Xzibit, M1 of dead prez, B-Real, Lil' Dap and Lord Superb.
Today the first single from "Known Associates" has been unveiled and is called ".45 Caliber". The song is produced by someone who goes by True Culture and gets the thumbs up from me. What y'all think about this song and the forthcoming LP?
LORD JAMAR - ".45 CALIBER"
Posted by lost.tapes.claaa7@gmail.com at 3:31 AM