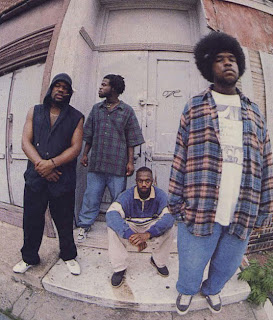 Considering that many of us have been banging The Roots' latest creation, "undun", in our headphones over the past month, why not take a look back to when these veterans still were a young and fresh crew on the scene. Having recently gotten my hands on Brian Coleman's refreshing and super dope "Check The Technique" via my man Linkan, the first chapter I happened to read was the one on The Roots and "Do You Want More??!!?". It's not at all my favorite album represented in the book and in fact I never considered it to be one of the group's best outputs either. But there is something very special, fresh and adventorous that is so inviting about that whole project which I consider the group's real debut album. I am well aware of the preceding "Organix" but just like Coleman states that some of the group members felt about it, I too always considered it as more of a "glorified demo".
According to the book, the music on "Do You Want More?!" came from the first time the group really worked on new songs in a studio together with professional engineers. They also took a whole lot more time putting it together than what they had done for "Organix". Their many live shows helped The Roots get signed to David Geffen's DGC imprint (later just Geffen Records)  in late 1993; a label who, back then, mainly housed rock acts such as Guns N Roses and Nirvana. The Philly crew were basically the lone hip-hop act in the house and maybe therefore they were not treated with the same amount of respect as their label mates. With their album constantly pushed back, the group consisting of drummer/producer Ahmir "Brother ?uestion" Thompson, emcees Black Thought and Malik B, keyboardist Scott Storch, producer Kelo, bassist HUB and manager Richard Nichols decided to flee the US in favor of London.

Staying in London for six months in '94, the crew played loads of gig and became the definite go-to guys for live hip-hop in the city at the time. This resulted in a contact with radio personality Giles Peterson who showed lots of love for the group and their jazzy hip-hop fusion. He was also the owner of the Talkin' Loud label and was eager to convince Wendy Goldstein @ Geffen that The Roots should release an EP. The resulting "From The Ground Up" was released for the European market only with the idea to build up the hype overseas first, and from there work their way into the U.S. market. The EP featured, as ?uestlove remembers, basically the first round of recordings that had been made for the album and "was a warning for people about what was to come". Indeed it was. The six track EP runs for over half an hour which means it features long jam session like songs and two of these were exclusive to this release - "It's Coming" and "Worldwide (London Groove)".
The group's combination of live instruments, A+ emceeing, jazz, soul and hip-hop was undeniable and pretty soon after they were heading back to the U.S. in order to complete the album. Originally set for a June 28 release that same year, it would take until the first month in 1995 before the album was actually available to fans. Although it must have been a bitch waiting for the label to get their thumbs out, in the end it might have been the best thing for the group. While waiting they had built a larger following through their extensive touring, the European EP as well as the singles "Distortion to Static", "Proceed" and "Silent Treatment". In traditional hip-hop spirit at the time, the 12" singles featured a whole bunch of remixes of each song, all with their own distinctive sound. For example, no less than five versions of "Proceed" were released!

Although some had tried the live band formula in hip-hop before, The Roots were the first to really nail it with a style that resembled a jazz piano trio (keys/drums/bass that is) smoothly getting it in with the very skilled rapping duo of Black Thought and Malik B. Although often refered to as a jazz/hip-hop band, I think "Do You Want More?!?" is the only album that really fits that title. Subsequent releases leaned much more to the hip-hop side of things, while on "D.Y.W.M." was close to a 50/50 affair. This was not least reflected through the choices of guests for the album - representing the jazz half were Steve Coleman on sax, the legendary Rufus Harley on bagpipes, the famous Casandra Wilson on vocals, Joshua Roseman and Graham Haynes on additional horns. As far as hip-hop cameos they had Dice Raw's unbelivable freestyle on "The Lesson", beatbox king Rahzel all over the place, MC ELO on "What Goes On" and spoken word poet Ursula Rucker's closing statements. All in all, it was very much a Philadelphia affair and, looking back now, a great first statement for a band that has given us so many quality albums over the years - this being the first. 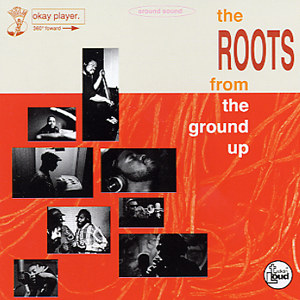