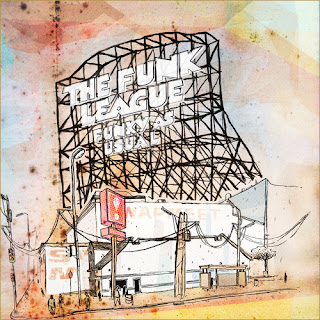 One of the coolest duo's around are Diamond D and Sadat X whether it's the X-Man putting his vocals on a fresh Kirkland beat or if it's a a shared vocal performance by the two, either produced by Diamond or by someone else. Their latest collaboration is called "The Bronx Bombers" and had my mind blown this morning; I know it doesn't say much considering we're only four days into 2012 but so far this is without a guestion my favorite.
Produced and taken from amazing Paris beatmaking duo Soulbrother Suspect and Hugo's "Funky As Usual"; the French guys has always been unbelivable when it comes to hip-hop, especially the beatmaking where the best guys are on par with some of who's considered the best in the US (9th Wonder, Kanye West and Just Blaze for example). On "Bronx Bonbers" they lace the two with another one of those tracks that people who fell in love with the hip-hop in the '90s will go nuts about without sounding the least cliché; lovely jazz bass, pounding drums just like they're supposed to be and some ill cuts that, in usual order, brings the song up even another notch.
The album has already recently been released in France but the rest of us will have to wait until January 24, so definitely note that date in your phones or cöen; I was out crate digging today so I need to stack up some dough so I can pick this one up right away - please tell me there's a vinyl release of this! Features ceoms from Large Professor, Sadat X (at least twice), AG, Diamond D (obviously, but maybe more than oce too), Gift Of Gab and a host of other dope emcees. Check out the download of the new single @ the very bottom and for those who might've missed out on it (I forgot to post it if too I'm not mistaken), take a look at first video from the project that hit the net about a month ago and features Sadat X as the lone gunmen on a song called "On & On"..
DIAMOND / SADAT X - "BRONX BOMBERS" (w. Funk Leauge)
Posted by lost.tapes.claaa7@gmail.com at 8:35 AM