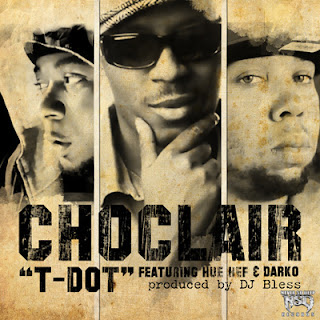 Choclair is a Canadian emcee who released five albums between 1999 and 2006 but since then been kinda quiet. He's worked with artists like Ol' Dirty Bastard, Rahzel, GURU, Kardinal Offishal, Kurupt, Saukrates and more but then more or less dissapeared from the scene. Now it seems that he's might aiming for a comeback as he just released a new digital single featuring the song "T-Dot", produced by DJ Bless. Pretty dope joint right here, let's see what the future has in store for Choclair.
CHOCLAIR - "T-DOT"
Posted by lost.tapes.claaa7@gmail.com at 3:49 PM

Email ThisBlogThis!Share to TwitterShare to FacebookShare to Pinterest
Labels: Choclair