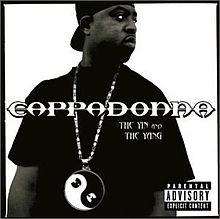 While we'ere at the topic of Darryl Hill, better knwn to the world as Cappadonna ,an extremely unique rhymer; some of his verses makes little to no sense while others are some of the illest bars ever laid down ro waxl His early apperances on Rae and Ghost's debuts gave us the impression that this was a young rapper to keep an eye on. His infamous three minute lyrical massacre on GFK's masterpiece "Winter Wars is along the lines of a top 20 verse of all time. Two years later it was time for Cappa's debut, mainly produced by The RZA (seven beats), True Master (with five tracks) and Goldfinghaz who contributed three bangers to the project, The '98 album "The Pillage" was an extremely dope Killa Beez affair that still stands stong today.
The sophomore jinx can be a bitch for many artists and Cappa's second album, "The Yin & The Yang", has pretty much become a standing joke of how a succesful album in no way should sound. Besides Goldfinghaz, The Wu-Elementz producers was replaced by Neonek, who handled almost half the LP and has never been heard from again, as well as one track each by Inspectah Deck, Agallah and even motherfucking Jermaine Dupri. Cappa's lyrical performance was far from the golden material we know he's capable of either on here, "Y'all better be still, my brains come out of my ball/ Been from my origin, I put the work in/ Any predicament, fat it don't matter to me/ The rap Oprah Winfrey with the less currency/ I rock beautifully, no security with me/ Hard times, a prophecy, one idea/ Two children, and three for virginity..." isn't exactly the stuff we knew him for from "Ironman", "Ob4cl" and "The Pillage". The album isn't all around horrible though; the True Master produed single "Super Model" with Ghost on the hook and the catchy, feel good record "Love is the Message" featuring Raekwon are both pretty dope tracks.
One of the main thing that fucked up "The Yin & The Yang" however was the falling out between the artist and The RZA in 2001. Not only was Cap's verses edited cut out from the Clan album, "Iron Flag", that was recorded around the same time; in fact he was even airbrushed out of the cover and promotional photos for the LP. Before their falling out, RZA was involved in Cappa's sophomore release and produced the two best songs on the entire album, "Why It Gotta Be This?" and "Real Niggaz". Had these two cuts been kept on the retail release, "The Yin & Yang", would most likely not be looked upon as one of the wackest rap releases by a respectable artist of all time. The two RZA tracks appeared on a rare vinyl promo only and in case you never heard them, below is your chance - I doubt y'all be dissapointed!
CAPPADONNA - "REAL NIGGAS"
CAPPADONNA - "WHY IT GOTTA BE THIS"
Posted by lost.tapes.claaa7@gmail.com at 11:59 AM