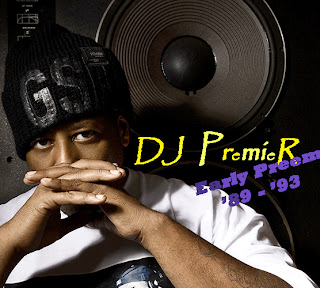 It's been a while since I blessed my readers with one of the signature The Lost Tapes compilation this blog originally was based on. Therefore, I decided to assemble some ill ish for y'all to prepare you for a great weekend and you can of course never go wrong with the embodiement of boom bap himself, Mr. DJ Premier. This time I wanted to showcase some early work from the man since there's so many slept-on gems from that period and I personally love Premier's original sound. Failures who comments that Preemo never changed up his style has obviously never heard masterpieces like the ones included here. Filled with heavy bass lines (most often sampled from stand-up bass solo's), saxes floating in and out of the soundscapes and rough, pounding drums, Preem's original sound was very jazzy in nature. He always had a harder edge to his sound than other notables who sampled similiar records at the time though, like Pete Rock and Q-Tip.
Starting off in 1989 with the classic "DJ Premier in Deep Concentration" from the original 1989 Gang Starr debut, I have tried to put together both classic tracks and harder-to-find gems to give an accurate representation of the years between '89 and 1993. That's why you'll hear the original 7" version of Lord Finesse's "Baby You Nasty" rather than the album version although the sound quality would be superior on the latter. Other ill tracks you might not have heard before include collaborations with Ice-T, Chi-Ali, Da King & I, Chi-Ali, J. Rock and a beautiful track with Swedish Neneh Cherry. As usual, all songs are in good quality, are the full songs and have no tags or DJ shouts/cuts. Apart from the first track, I deliberately did not include any Gang Starr tracks or features, this is because these have previously been collected seperately @ The Lost Tapes. One last thing......... TURN IT UP!!
01. "DJ Premier in Deep Concentration"
02. Lord Finesse & DJ Mike Smooth - "Baby, You Nasty" [7" Version]
03. J. Rock - "Drug Dealer" [BoomBox Jeep Remix]
04. Ice-T - "Lifestyles of the Rich & Infamous" [Remix]
05. Chi-Ali - "No Surrender, No Retreat"
06. Too $hort - "In the Trunk" [Glove Compartment Remix]
07. Heavy D. & The Boyz - "Yes Y'all"
08. Da King & I - "Flip Da Script" [Toot Da Horn Remix]
09. Marxman - "Drifting"
10. Da Youngsta's - "Wake 'Em Up"
11. Neneh Cherry - "I Ain't Gone Under Yet"
12. J. Rock - "The Real One"
13. Mobb Deep - "Peer Pressure"
14. Nasty Nas - "Represent '93"
15. Shyheim - "On & On" [DJ Premier Remix]
16. Red Fox - "Ya Can't Test Me Again"
17. Compton's Most Wanted - "Def Wish II" [East Coast Gang Starr Remix]
18. DJ Kool Red Alert - "Red Alert Chant"