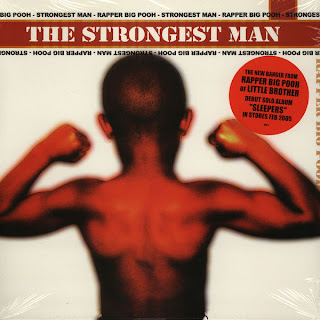 Like many I frst came in contact with Rapper Big Pooh as one third of the soulful trio known as Little Brother. These three North Carolina natives created a unique style that draw heavily from the days when hip-hop was an original and incredible artform that based its music on sampling. Not to say that it isn't anymore, but thanks to greedy A&R's who believes money is the only factor in making great music it's becoming more rare. Little Brother released two critically acclaimed full-length albums as a full trio; 2003's debut "The Listening" and 2005's "The Minstrel Show", both produced in 9th Wonder's trademark soulful boom bap sound. Emcees Big Pooh and Phonte sounded great on these type of tracks but turmoil was starting to take place within the trio. 9th Wonder left the group shortly after the finished '05 album while the group continued to make music on their own and releasing two albums under the Hall Of Justice imprint.
But this post is not about Litlle Brother, although I always likes to give a little background on the music that I'm writing about. In 2004 Pooh released his debut solo album, "Sleepers", featuring usual suspects Median, Joe Scudda, Murs as well as an official LB joint (meaning a Pooh/Phonte track produced by 9th Wonder). I must admit that I haven't heard the album in full yet but some months ago I picked up the first 12" from the project, "The Strongest Man" which is a really tight record that I've been banging alot since. All of the three songs are produced by 9th Wonder, and neither of these collabos dissapoint. As should be the case with any respectable single release, "Strongest Man", includes a B-side that's exclusive for this release; "Theme Music".