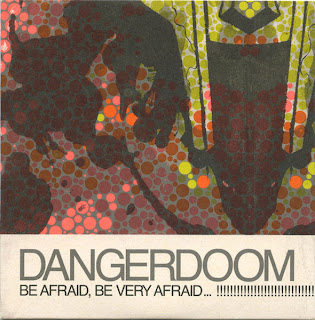 Considering that there haven't been a whole lot happening worth giving any attention to the last couple of days I decided to hit y'all up with  a lil' Lost Tape so to speak. After watching the almost two hour long MF DOOM interview in Madrid that I posted yesterday, I've been inspired to revisit alot of the MF classics such as "MM... Food" and "Madvillainy". One of his absolute finest hours to me though is his impeccable work with UK-born producer Danger Mouse on the LP "The Mask & The Mouse", released as DangerDOOM. Mouse's beats were more stripped down and cleaner sounding than what we're used to hearing DOOM spit on which I think really brought out his unusual way of wordplay and mind boogling lyrics to the forefront.
There's been talk of a follow-up album in the works but since DM haven't shown much interest towards his hip-hop roots as of late, I'm not ready to get hyped for those rumors just yet (definitely don't sleep on his work with groups like Broken Bells and The Good, The Bad & The Queen though). A while back I uploaded the "Occult Hymn" EP with a few extra tracks so this will be the final round of D.D. posts considering that this is the last known material out there. The work in question is a promotional 6-tracks CD that Lex Records gave away with purchases of the November '05 issue of Hip-Hop Connection Magazine. It consits of two songs from the then forthcoming album as well as a few DM productions. The "Knuckle Sandwhich" remix was exclusive to this release and I believe that "Doomage" is half rare too (it's the only song on here produced by MF btw). Even if you've heard these songs this is still a nice 15 minutes to kill on this cold ass Tuesday evening so check it out!
01. DangerDOOM - "Mincemeat"
02. Prince Po / MF DOOM - "Social Distortion"
03. Non-Prophets / Slug / Brother Ali - "Doomage"
04. Danger Mouse / Sage Francis - "Garden Gnomes"
05. DangerDOOM - "Perfect Hair"
06. DM & Jemini - "Knuckle Sandwhich" [DM Remix]