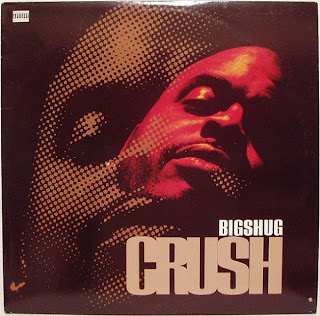 The name Gang Starr will always be synonymous with quality hip-hop, you can take my word on that. Besides the main duo of GURU and DJ Premier, the chain and the star was also protected by The Gang Starr Foundation; a group of like-minded East Coast rhymers that appeared on the duo's albums and got the advantage of getting Preem and Guru beats for their own projects. There's been several semi-official members over the years but the real core of the Foundation is the trio of Jeru the Damaja, Group Home and Big Shug. Of course Jeru and Group Home released incredible full-lengths in the mid '90s, produced by Premier and generally hailed as classics today. Why Big Shug didn't get the same opportunity at the time despite being just as important to the dynamics of the crew is something I never really understood.
What Shug did, however, was to release two Gang Starr produced 12" singles in 1995 and 1996 respectively. These five songs gives us a good idea of how a '90s Shug album produced in the same manner as "Living Proof" would have sounded - certainly a lot of potential. Who knows, maybe the Boston rapper turned New York emcee just wasn't ready yet? One thing that's interesting is that the first single's A-side, called "Treat U Better", was a Premier produced love song with Shug singing throughout. The B-side tracks were both typical hip-hop joints for the time. It suggests that neither the artist nor the producers could decide on the direction they were to take with his career. They are all good tracks but it definitely caught me a bit off-guard hearing the A-side for the first time. On the second single, which dropped on Pay Day/FFRR about a year later, Shug seemed more certain about being an emcee rather than a singer. "Crush" is classic Gang Starr style boom bap with Preem providing one of his classic scratched vocal clips hooks. The B-side "Official" might be even more interesting considering it's a posse cut representing some of the finest rap talents to emerge out of the Boston area. Over a dark and moody soundbed produced by someone called Bless One, Shug invites the tag team of Edo G and the great late emcee Scientifik (who I believe made his last cameo here) to rip the track in half with him. Mission accomplished!
To get a good glimpse into what an album by this guy would have sounded like around 1996 I have put together a lil' compilation with the songs from the two 12"s that's represented by tracks 1 to 5. The remaining tracks are the majority of Big Shug's guest apperances in the mid '90s, taken from albums by DJ Krush, Group Home, Gang Starr and the promotional compilation for Guru's Ill Kid Records.Crank up the volume, sit back and let the missing link of the Gang Starr Foundation take you on a trip back to the '90s.
01. "Crush" [Street]
02. "Stripped & Pistol Whipped" [Street] (Ft. GURU)
03. "Treat U Better"
04. "Official" [Street] (Ft. Edo G / Scientifik)
05. "P.D.S. (Pimp Style)" [Street]
06. "Momentum" (Ft. GURU)
07. "Do What Pays Ya"
08. "Serious Rap Shit" (Ft. Gang Starr / Group Home)
09. "Most Wanted Men" (Ft. GURU)
10. "Fuck Around, Lay Around" (Ft. Gang Starr)

BIG SHUG - "CRUSH: FOUNDATION OFFICIAL"
Posted by lost.tapes.claaa7@gmail.com at 2:53 AM