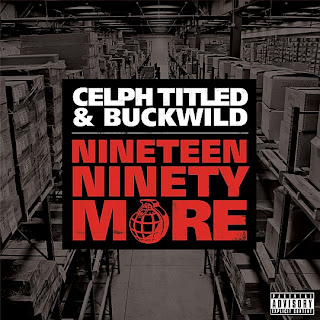 Last year I dubbed Buckwild & Celph Titled's "Nineteen Ninenty NOW" the best album of the year. It was just such an ill throwback record in every sense, and a great tribute to the sample based hardcore hip-hop of the '90s that I guess anyone who finds interest in this site loves. How great isn't the news then that Buck & Celph have been preparing another dish for us? It's not an entirely album but a limited 2-disc set featuring all the instrumentals on one CD while the other are packed with a few new/unreleased joints plus all the "B-sides" that dropped around the time of the original album release. The set, which is called "Nineteen Ninenty More", is distributed by No Sleep Records and is now available in stores. Below you can see the tracklist for disc one with download two tracks included to get your mouth watering. Make sure to order your copy @ UGHH if you like what you're hearing!
01. "While You Slept" (Ft. Lawz)
02. "Good Hell Hunting" (Ft. Outerspace)
03. "Rapid Fire" (Ft. Cella Dwellas)
04. "Get Stupid" (Ft. Lord Digga & Kwest)
05. "The Celph Titled Show"
06. "Nothin' to Say" (Ft. Rise)
07. "There Will Be Blood (Remix)" (Ft. DITC & Brand Nubian)
08. "Buck's Four Course Meal"
09-16. Instrumentals of Tracks 1-8
Posted by lost.tapes.claaa7@gmail.com at 3:13 AM