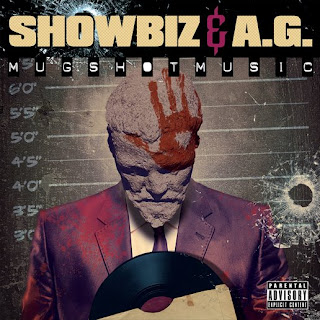 My original idea, before I conceived The Lost Tapes, was to make a D.I.T.C. blog/site and I actually came quite a long way in designing it and was close to completing it (I still have that somewhere, so maybe one day). If anyone, for some very strange reason, wonder why there's so much Diggin' stuff on here, now you got your answer. Plus of course that these guys are basically my all-time favorite crew tied with Wu-Tang Clan. Today AG uploaded the brand new single from their upcoming "Mugshot Music" (their first release since late 2007 but more than fifteen years since their last actual official album, the classic "Goodfellas"). "South Bronx" is the fifth album leak, and not to sound like a idiot but I hope this is the final single before they release the actual LP. This is at least the last track off it that I'll be bumping since I want to keep things as fresh as possible once I'm able to hear it as a whole. "South Bronx" is produced by Show himself and mixed by DJ Premier at D&D Studios (now HeadQuaterz). Another banger from the Bronx Bangers.
01 SOUTH BRONX SHIT by AGofDITC
Posted by lost.tapes.claaa7@gmail.com at 6:28 AM