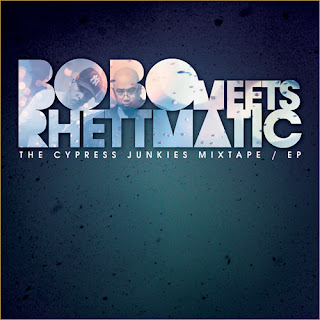 Eric Bobo, the percussionist of Cypress Hill, hooks up with DJ Rhettmatic of The Beat Junkies to bring the world the free "The Cypress Junkies Mixtape" EP. The extended play is divided into two parts; tracks 1 to 3 are the so called Cypress Junkies Mixtape which is basically a DJ mix of old funk, soul and old school hip-hop that have been sampled by Bobo's group at one time or another. The remaining four tracks are the actual mini EP and features four new tracks produced by Eric Bobo and DJ Rhettmatic. The exception is "Rosetta Stone Grove" which originally appeared on Rakaa Iriscience's 2010 album "Crown on Thorns". You can stream via Soundcloud below but if you want to download the separated tracks, head over to Soundcloud and scroll down and you'll find a link for download.
01. "Rosetta Stone Grove" (Ft. Rakaa Iriscience & Noelle Scags)
02. "Astrofunk"
03. "BMR Groove 1"
04. "Uptown Soul" [co-prod. by J. Rocc]