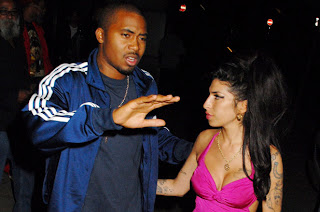 Amy Winehouse tragically returned to the essence late last year due to alcohol poisoining, leaving much of the material she recorded for her third LP in London around '08 locked in the vault. Until now that is! Orignally, she handed over the music to the label who didn't know what to make of it. According to the suits the music were far too different from her precious hit material, with too much  influences from reagge and a host of other genres. This left the album completely shelved with the intention to probably never be herd again. But now, two years later Winehouse's final LP "Lioness: Hidden Treasures" is gearing up for release on December 5. The majority of the album's production is handled by Mark Ronson (who proved having an incredible chemistry wih Winehouse over the years) and Salaam Remi who's obviously no slouch either. Remi also brought along his homie Nas for the track "Like Smoke" which works as the first single from the project. And while it's not the classic Winehouse/Ghostface collabo from '06, it's a pretty sweet track nonetheless so crank up the volume om this one!

AMY WINEHOUSE w. NAS - "LIKE SMOKE"
Posted by lost.tapes.claaa7@gmail.com at 2:53 AM