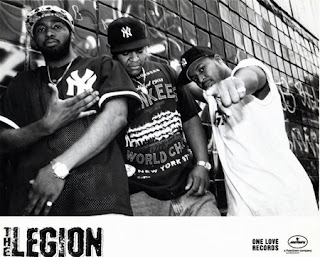 The Legion were a hardcore rap crew from The Bronx that first made their mark as associates of Showbiz & AG and Black Sheep. It's not unfair to say that their music forms as a fusion of the above mentioned groups and shares many similarities with both. The Legion was made up of a trio consisting of Chucky Smash, Cee-Low and Molecules who also produced most of the group's material. According to Smash, 'Cules was a real street cat who also worked the SP1200, Cee-Low a player and club-goer and himself heavily into graffiti and the culture of hip-hop. With all these styles combined The Legion was born. Chucky Smash also told in the UNKUT interview how they used to live together with Showbiz and Dres and moving in the same circles which certainly rubbed off heavily on their own music.

Like most, my first introduction to The Legion was through that banging interlude on Show & A's "Runaway Slave" where a hardboiled beat's rocking and a voice declares that "The Legion's in the house... Cee-Low's in the house....Molecules's in the house" and so on. The first time that interlude cut off I was pissed because I was so hyped by the sounds of it and was just starting to expect to hear the full thing. However, The Legion got signed to Mercury Records and one year after the "Runaway..." interlude, in 1993 that is, the trio came out with their debut single and video, for the song "Jingle Jangle". The hard cooking sounds with its strong jazz influence was a common sound at the time but the guys displayed a lyrical style and chemistry that was both humoros and hardcore and made them stand out on their own. "Jingle Jangle" also featured an excellent performance by Dres of Black Sheep which revealed another connection that would prove important for the future.
After some moderate success with the single, Mercury gave the group the thumbs up and a budget to record a full-length album for the label. The result was to be the strangely titled "Theme + Echo = Krill", a largely self-produced album that continued where the preceeding single had left off both from a lyrical perspective as well as with the beats. Cee-Low, Molecules and Chucky Smash all hold down their parts on the microphone well, but what really has made this album stand the test of time, at least for the initiated who actually knows about it, is the banging production. The record is full of jazz and funk samples, prominently with keys and all sorts of horns, pounding bass (often accoustic stand-up bass) and thick drums. Not suprisingly, the sounds are reminiscent of what D.I.T.C. and Mista Lawgne were doing in the early '90s. Several of the samples would much later be used by major artists like Mobb Deep, Smif-N-Wessun and MF DOOM. Molecules would later go on to produce slamming records for Mos Def and Dres although his placements has been few and far in between.

The album was completed and ready for release in the middle of 1994 but was heavily under promoted by Mercury, in fact the vinyl version were only pressed up in promo copies and both versions quickly went out of print. "Theme + Echo = Krill" was a great album with a bit of an old school feel to it but in 1994 hip-hop was starting to move on into new territory. Had this album been released at the same time as "Runaway Slave" or "A Wolf in Sheep's Clothing" I'm confident in saying that this LP would have been remembered much in the same way as those records. Unfortunately for the crew, the hard work they put into making a great album passed quietly above most hip-hop heads and both the vinyl and CD copies of "Theme + Echo" quickly became out of print and an eBay item. Could we get a reissue please? Traffic, I'm looking at you!
Besides the underground classic "Jingle Jangle", highlights include the second single, the bass heavy party anthem "Legion Groove" and the two Mista Lawgne productions, "Once Upon A Time" and "Zootie Bang". And of course it wouldn't be a early '90s album without the obligatory posse cut to show for, now would it? In this case, Show & A fans will be thrilled that "Who's It On Pt. 1" is the entire version of the "Runaway Slave" interlude and features a classic AG verse plus some Showbiz vocals over that addicting ruffneck beat. "...Part 2" in the same series adapts a different beat and features the trio going head to head with Black Sheep and Chi-Ali and you can bet it's a lyrical clashing that will take you back to the golen days of rap. It can't compare with the defining masterpieces of its time as there are moments of the album that does sound dated and unoriginal, especially as the album runs on for slightly too long, but these are mostly minor flaws and as a body of work it is a very good, and sadly very overlooked, one.

It's not all fun and games though; most of the latter part of "Theme + Echo" revolves around more serious subject matters including the use of the word nigga, it's origin and the meaning of it. Several important skits deals with this topic while songs like the dark and moody "New Niggas" has the crew spitting over a sinister piano-laced track where a murky bass clarinett gives a chilling effect as it floats in and out of the composition. One of the LP:s finest moments however comes with the closer, "Rest in Peace", a heartfelt tribute that deals with the pain of losing someone close and anyone who've done so should be able to relate. It's ill that Molecules flips the repetitive bass line (later used by Alchemist for Mobb Deep's "The Realest") for the basis of the song while he's adding several horns fading in and out to emphasize the theme. "Rest in Peace" is a great closer for a great album and will have you wishing these guys would've actually blewn up the way they deserved. After the album went wood, the group made the occassional guest apperance on albums by Black Sheep/Dres but has since faded into obscurity. I have a memory of reading somewhere in the mid-'90s that Dres was starting a record label and that he would sign The Legion as his main act; guess that never materialized.

Email ThisBlogThis!Share to TwitterShare to FacebookShare to Pinterest
Labels: Black Sheep, Legion, Out of print, Review