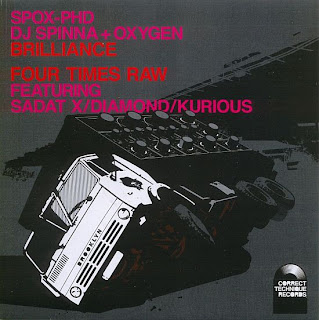 For someone like myself who mostly choose to listen to my music in album format, the few times I come across a single that I can't stop repeating I know I got something special on my hands. This is the case with the debut single by the duo called SPOX PhD whose appropriately titled "Brilliance" is also the first release on the newly formed Correct Technique Records. SPOX PhD is a duo consisting of severely underrated veteran producer DJ Spinna along with emcee Ox The Architect (p/k/a Oxygen) whose made a splash on the underground scene the last few years through his work in the groups Sputnik Brown and Soundsci. The musical connection between Spinna and Ox can be traced back to an apperance by the latter on the producer's 2009 album "Sonic Smash", on a promising banger titled "Elemental" which could be viewed as the first SPOX PhD record as it laid the foundation for their working relationship.

SPOX PhD - "Brilliance"
True school heads will rejoice over the A-side's jazzy melodic groove and the ill execution of balance between the laid back (the melodies) and the hard (the knocking drums and fat bass line). Oxygen's smooth delivery is perfect for the trademark production of Spinna as the rhyme slinger displays tight breath control while boosting well played lyrics like "Your neck wanna snap? Then let it, I copped these poetics from my dad through the laws of genetics / Set it! The blood type's O, the XY coordinates, I supply the illmatic for the insubordinate". Brilliant was the word, right? I can't imagine a better introduction to this newly formed group than this lead track. "Brilliance" is ultimately an impressive display of beats and rhymes provided by two gentlemen well skilled in the trade of that ol' boom bap.
On the flip side we find an all around hardcore sound on the posse cut "Four Times Raw". The production is less charismatic than on the A-side but the marching warrior drums, progressive bass line and underlaying guitar samples still makes for a winner in my book. There's a good chance it will have you pumping your first in the air and neck snapping forth and back. It's far from a shame to gather three legends named Sadat X, Diamond D and Kurious for a limited 7" release but listening to the results I'm thrilled they did just that! One of the things that make this one stand out as a superior posse cut is how each of the four emcees owns a very distinctive voice. Even if you're just barely familiar with them you'll probably be able to separate them. Ox once again proves that he's one of the brightest rappers that's still relatively fresh on the scene as he has no problem hanging with these veterans and closes the rhyme session with a boom. "Heard this beat knocking so I answered/ Called up a few vets to help me enhance it" sums it up pretty well.
SPOX PhD - "Four Times Raw" (Ft. Sadat X, Diamond & Kurious)

As strong as the chemistry between DJ Spinna and Ox The Architect clearly already is, one can only imagine how dope future projects will be once they get even more comfortable around eachother's respective styles. One thing is clear, the future promises bright things for the duo who has choosed to call themeselves SPOX PhD. In other words, if the two cuts heard here are any indication of what their forthcoming full-lenght album will sound like, chances are they will deliver the best LP of the year. In fact if there is anything bad I have to say about this single is that it leaves a large appetite for more; yes, I know I'm a harsh critic but that's the reality! Please support real hip-hop and cop "Brilliance" @ UGHH.
Posted by lost.tapes.claaa7@gmail.com at 8:34 AM