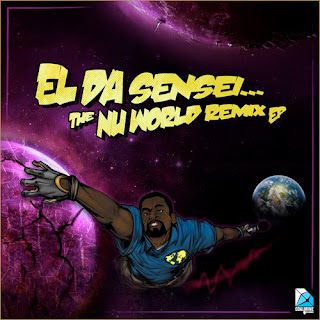 El Da Sensei, the New Jersey emcee who was one half of the acclaimed duo Artifacts returns with a new banger featuring Nutso and Brown Bag All-Star's Soul Khan. The joint is taken from a remix EP called "The Nu World Remix EP" which is the follow up to last years critically acclaimed solo album "Global Takeover 2: Nu World". The EP will hit the net in less than two weeks and will feature five remixes of songs from the abovementioned album. The EP will feature production and cameos from !llmind, M-Phazes, Sean Price, Bekay, Tame One, Rah Digga and Mela Machincko.
El Da Sensei feat. Nutso & Soul Khan - Nu World (Part II) by Diamond Media 360
Posted by lost.tapes.claaa7@gmail.com at 6:40 AM