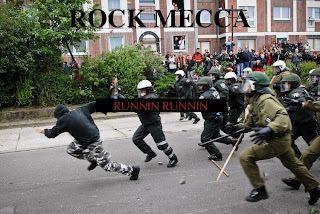 Rock Mecca is a new up-and-coming emcee hailing from Queens, New York. Mecca is currently preparing his debut album "Pirate Radio Star", building up his hype via ill singles and if you ask me he's worth keeping an eye on. Judging by the two singles below, his love for vintage and gritty East Coast hip-hop shines through while he's also making a point of maintain his own identity.
At the moment Mecca is working on building a buzz through the ill singles in orer to promote the forthcoming LP. "Runnin' Runnin'" is my favorite and is also the newest single, a song that "cleverly flips a classic Hip Hop interlude into a certified heater". The single artwork can be seen uptop and the download link is the first out of the two Hulkshare links below. The previous release from the project is a joint called "New York Noise" which is another solid effort that you find right at the bottom of this page. If you want to support the artist you can donate $1@ Rock Mecca's Bandcamp and learn more about the artist @ Reverbnation.

Posted by lost.tapes.claaa7@gmail.com at 3:26 AM