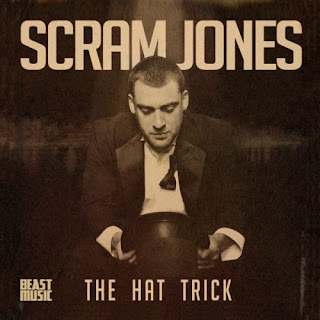 Scram Jones older work rarely stood out to me and I still thought he was a so-so producer even as he started making a name for himself. My mind started changed when I heard his four contributions to Rae's recent opus, "Only Built 4 Cuban Linx... Pt. II" where he provided a string of joints for The Chef that was as good as the beats done by MoSS, True Master, Eric Sermon and Alechmist. I didn't really know he also rhymed though; my personal opinion is that in most cases producers should stick with his SP's and MPC's considering that there's not many that can handle both succesfuly. There's of course a few notable exceptions to this rule (early RZA, Large Professor, KRS-One, Diamond D, Large Professor, Grand Puba, Q-Tip and even True Master to name some.)
"The Hat Trick" hit the net today as a free digital download, so that should at least guarantee a listen to see if it's worth for Scram to go solo. There's no individual production credits attached to the tracklist but according to several sources outside proucers working on the album were Gangrene (Alchemist and Oh No), Vin the Chin, Sixth Sense, Scott Blanco and Blickstreet. I'm all for new Alchemist and Oh No beats but cosidering that Scram is a nice producer in his own right it makes me wonder why he would need Vin the Chin, Blickstreet and Scott Blanco... Oh well, let's see how this works out in reality. Anoter thing that comes to mind; the Gangrene collaboration "How to Drown A Fish" (which was a early sneek peak as it leaked late last year), I wonder if that's one of The Chemist's or Oh No's production which literally would make it a new Gangrene song. Aight I'ma shut up now so you can listen; feel free to drop a comment with your thoughts (positive or negative). Shouts to DatPiff for the link!
SCRAM JONES - "THE HAT TRICK" [via. DatPiff]
Posted by lost.tapes.claaa7@gmail.com at 5:33 AM