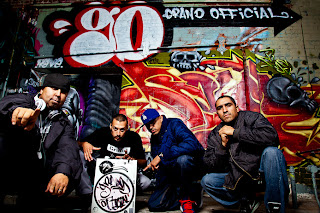 Grand Official is a new five man crew from Pico Rivera, Los Angeles, CA that you're most definitely gonna hear more from in the future. The group's five members consists of emcees A. Dose and Adlife, producers A-One and Grip plus turntablist Hallucin-8. Grand Official formed in 2003 and lives, breathe and sleep hip-hop with a pronounced love for all of the four elements of the culture. You can hear the vintage '90s hip-hop sound in their music but with a very modern twist. The sick and meaningful rhymes, sample-based beats, and something that's been missing in my opinion, heavy turntablist!
The crew's love for the classic boom bap shines through in their music and amongst many others influences include legends like Pharoahe Monch, Gang Starr, M.O.P., Ras Kass, Dilated Peoples and many more. Their digital single "Incredible" and "L.A. L.A." is now available for free download so check that out below. The latter track was recently given props by none other than DJ Premier as he played it at his 21st October set @ LiveFromHQ set on XM Radio. Check out the joints and keep your eyes open for more Grand Official here @ The Lost Tapes.
GRAND OFFICIAL - "L.A. L.A."  /  GRAND OFFICIAL - "INVINCIBLE"
Posted by lost.tapes.claaa7@gmail.com at 3:01 AM