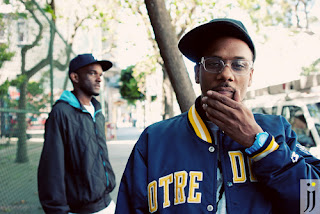 Tanya Morgan is a hip-hop group currently made up of Brooklyn's Von Pea and Donwill, the latter originally hailing from Cincinnati, Ohio. They've been releasing quality music since they debuted with "Moonlighting" in 2006 on Loud Minority Music to generally positive reviews. They really made a name for themeselves with their sophomore album three years later however. "Brooklynati" caused quite a stir in the underground hip-hop community for the then trio, by then also featuring emcee Ilyas. A concept album with insightful rhymes dealing with everyday situation and tight, often soulful production and quality skits rightfully built a devoted fanbase of the trio.
Last week producer/emcee Von Pea and rapper Donwill released a mini album titled "You & What Army?" which premiered on Okayplayer. The release features eight songs and an intro with a running time of 30 minutes, making it almost a full-length album by today's standards. “The EP is a natural progression, in that it blends the production sounds that you heard on our solo albums into one cohesive set of songs”, says Donwill. “We also were conscious of people noticing that the trio is now a duo, so we wanted to ensure that this and all future projects have a different sound and feel than "Brooklynati" and "Moonlighting".”Enjoy this shit y'all, I know I do!
Posted by lost.tapes.claaa7@gmail.com at 5:17 AM