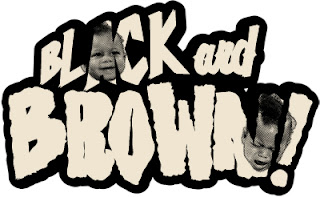 I strongly recommend my readers to pick up "Black & Brown", the brand new Black Milk produced Danny Brown EP that recently dropped in both digital, 12" and CD format. These two Detroit artists really compliment eachother extremely well, Brown spit rhymes with a relentless flow that have you say "did he really say that?!" while locating the rewind button. He might very well be illest youngster to emerge from The "D" at the moment and Milk's futurustic headnodders compliment his flow just perfectly. We all know Black Milk is an extremely hot producer right now and it's not too often you'll hear a subpar beat from him.

With that being said, I think this EP has the illest production he's laced since at least the "Tronic" album. Milk got the hardcore boom bap on lock, but ain't afraid of trying new things and incorporating alot of unexpected instruments in his compositions. One can still spot traces of Dilla, Detroit's house and techno culture and of course the good ol' Motown soul. "Black & Brown" consists of ten tracks and clocks in at just under 25 minutes but there's also an iTunes exclusive called "Nanandos" that digital purchasers was blessed with. As I'm strictly a militant CD and vinylist buyer, I feel no shame in hooking up my readers with that joint too to add to your playlist. Hopefuly you'll pick up the release on wax or Compact Disc @ Fat Beats who's the label behind this release while checking out the iTunes exclusive below.
DANNY BROWN / BLACK MILK - NANANDOS"
Posted by lost.tapes.claaa7@gmail.com at 3:02 PM