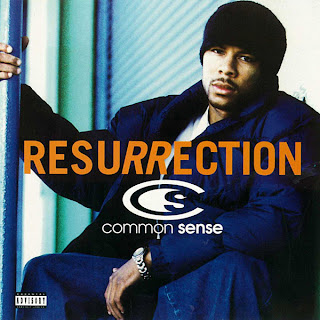 While we're at the topic of Lonnie Rashid Lynn (that's Common Sense for those of y'all who haven't done your homework) I figured I oughta bring back the 12" Throwback section of The Lost Tapes since it's been a while. I was dusting off my vinyl copy of the "Resurrection" LP just the other day and it's still one of my favorite albums of all time. The '92 debut LP that preceeded it had some dope beats but was overall pretty corny in its execution. However, once No ID, Twilite Tone and our main emcee started the recording of the sophomore mid-'90s album they really had found their own niché and understood the mechanics of creating timeless music.
The last release under the name Common Sense (as you know he had to drop the Sense part of his name by the next project), were the "Resurrection EP". The vinyl release featured instrumentals, clean versions and accapellas but the CD-single was more true to the EP format which is why I decided to include that despite the "12" Throwback" slogan of the post. Five banging tracks are featured on this essential record that should please any fan of the responisble MC and producer(s). Although there were mostly remixes and alternative takes of previously released material the majoritly of them includes brand new lyrics furthering showcasing the Chicago emcees tight flow and song writing skills at the time.
"Resurrection '95" utilizes the same amazing No I.D. beat as the album opener but with three completely new Com' verses with additional keyboard work by Mike Lorello. Following that are the two legendary Large Professor remixes, both often mentioned in discussions about Extra-P illest remixes of all time; and rightfully so. Twilite Tone reprises his beat and vocals from the album on "Chapter 13" which still holds up as a true banger. The EP rounds off with an earlier Common Sense song that harks back to his first album. The version inclded here are however an exclusive No I.D. remix of the '92 single "Soul By the Pound", here titled The Thump Mix. Overall this Extended Play is a great companion piece to the "Resurrection" LP and is also notable for being the last disc ever released under the name of Common Sense. All songs are in 320 kbps bitrate so the sound quality is great. Heed this warning though; this should be played loud as fuck!.
01. "Resurrection '95"
02. "Resurrection" [Extra P Remix]
03 "Resurrection" [Large Professor Remix]
04. "Chapter #13" (Ft. The Late Show's Ynot Never The Less)
05. "Soul By The Pound" [No I.D.'s Thump Mix]

Email ThisBlogThis!Share to TwitterShare to FacebookShare to Pinterest
Labels: 12" Throwback, Common, No ID