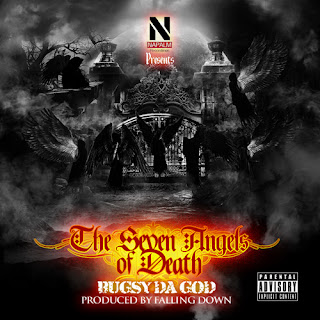 Napalm Records artist Bugsy Da God released one hell of an album with his Dom Pachino approved "The Terrorist Advocate". To give a little something back to all his supporting fans in the spirit of Christmas, he made a promise to drop a free track EP today. The seven feature tracks are all produced by none other than long time Killarmy affilliate Falling Down who previously laced such classics as "Street Monopoly", "Monster", "Bum Rush", "Originators" (Killarmy and members), "He's A Rebel", "Cradle to the Grave" (Inspectah Deck) and the majority of the criminaly slept on real debut from Dark Skinned Assassin in 2009. In other words this project is hotter than burning christmas trees and tracks like "Purgatory Theory" and "Rapid Fire Snipers" will have you in full army mode! You can pick it up directly from Mediafire link supplied by Portis24 below or sign up to get it directly from the artists (which also allows you to stream before downloading) via MixConnect and DatPiff , respectively.
01. "Purgatory Theory"
02. "Maquerade Of Killaz"
03. "Perfect Plot"
04. "Rapid Fire Snipers" (Ft. Dom Pachino)
05. "Pool Of Tearz"
06. "Fire & Brimstone"
07. "Lost Souls"


BUGSY DA GOD - "SEVEN ANGELS OF DEATH"
Posted by lost.tapes.claaa7@gmail.com at 3:31 AM