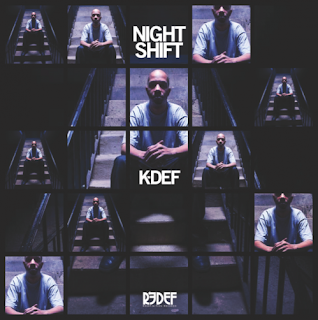 One of the main differences between good music and great music is that the latter will take you places, shut out your problems and completely consume your mind. K-Def’s music has been taking listeners on amazing journeys for almost two decades now and his latest release “Night Shift” certainly continues the tradition. This is music created during late night shifts and therefore bares all the trademarks of the night. It is often dark in nature and packs a dreamlike and introspective tone, often built around deep basslines. Those familiar with the brilliant sneak peak that was the “For Def’s Sake” 7-inch knows what to expect.
Fittingly to the concept, the album kicks off with “Escapism” - a remake of Pete Rock’s classic tune of the same name. Here, K-Def manages to not only make it his own while keeping the essentials of the piece; he also makes a fifteen year old masterpiece sound like a brand new song even to those who grew up on Pete Rock beats. Interestingly enough it also features a rare appearance by emcee Rob-O, one of the credited writers of the original song, who makes his presence known through two serious verses. K-Def compliments the vocals by building up a gritty sound collage of knocking drums, atmospheric vocals and the signature trumpet hook of the original, but it’s the heavy but melodic bassline that really defines the music here.
On the flipside we find a similarly inspired vocal performance by Raw Poetic who joins Def on the surprisingly up-tempo piece “Night Owls”. The funkiness is evident on here as it’s a record that’s all about the groove; something K-Def knows a whole lot about since his work with Lords of the Underground and others. Complete with a strong hook that might very well have you singing along, I could almost hear this one blasting in the club.
K-Def - From Da Brain by Redefinition Records
The remaining, larger part of the project is made up of gripping instrumental work, something that over the last few years have proven to be one of the producer’s strongest trades. “Night Shift”, however, stands as his finest and most convincing foray into the arts of the vocal-less hip-hop LP so far. As I mentioned earlier great music will take you places which is something a solid vocal performance can help with immensely. With instrumental records you’re going to need something equally moving to catch the listener’s interest and keep it throughout a song or an album. K-Def got this formula on lock here as he never allows the music to simply just drag along; he knows when to switch things up, where to add new instruments to the mix and what sounds should be riding the frontline.
One of the treats of the EP is the many different sounds that ‘Def brings to the table. “From Da Brain” has its roots in jazz and uses a hard break underlining a brilliant piano solo that sweeps the listener along much in the same way that a skilled emcee should do. “Indian Juice” is as dope as it’s short and is an interesting take on the meeting between Indian folk music and hip-hop beats. It’s a concept previously visited on Madlib’s Beat Konducta series but K-Def’s try comes off as more natural and more core hip-hop than anything from that LP.
"Sparkle" and "Super Heath" are both dreamy pieces that captures the night vibe the title references perfectly. On both tracks K-Def makes use of the vibraphone as the "soloist instrument" to great effect. The latter will definitely be reminiscent of Q-Tip's work on Nas' classic "One Love", but is in fact a tribute to the original Heath Brother's song rather than a remake of Tip's version. To create something this close to the original source, which of course was created by an entire group, with an all digital set-up and without the use of any samples is more than remarkable.


K-Def - Supa Heath (LP Version) by Redefinition Records
Following the eight tracks featured on the vinyl, the other formats includes four extra bonus joints that fits right at home with the rest of the EP and are similairly introspective instrumentals. It doesn't bother me at all that I've heard these tracks uncountable times already as they have a timeless quality to them. My favorite of these is "Times Change" which is one of the most breathtaking works I ever heard from K-Def. The production is extremely layered and rich, with several equally interesting themes following each other. An array of different sounds from woodwinds, guitars, horns, vibes and vocal clips contribute to form a musical statement that mirrors the movements of time and the seasons of the year.
Complete with bonus tracks, K-Def has with "Night Shift" released his most defining solo project yet. There's plenty of stuff on here that will guarantee use of the rewind button as all the pieces are standouts with their own identity; something many producers fail at when creating complete instrumental works. Being that it's so short it does however leave a big appetite for more, and I can't help to think that only a couple more songs of the same quality would have bumped it up from brilliant EP to fantastic album. With that being said, this review is for what's on the disc and not what's not on it and by simply judging the music this mini album comes damn close to a perfect score. One also got to give it up to Redefinition Records for the sick artwork, packaging and the fact that it's being released on three diferent formats. "Night Shift" is available worldwide on December 13, you can order a copy on 12", cassette or CD here.
Posted by lost.tapes.claaa7@gmail.com at 9:21 AM