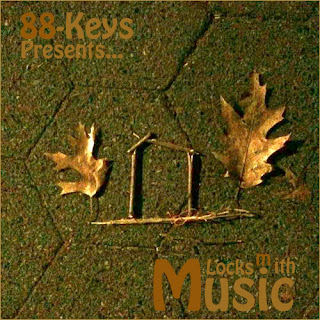 A few hours ago producer/emcee 88-Keys released his new mixtape "Locksmith Music" showcasing the newly signed artists of his label including Lil' Vic, Nemo Achida, Robert Atkins III, Tre DeJean and Mann95; mixed by EightyOcho. 88-Keys was a producer I used to check for alot back in the Rawkus era though he's been less consistant with his later output in my opinion. Still, this mixtape seems to pack some heat here and there. I strongly recommend track #10, "History is Written", featuring Lil' Vic and produced by The Legendary Buckwild of D.I.T.C. Other notable joints include "Us & Them", a Robert Atkins III freestyle over (an almost untouched) Pink Floyd's classic song of the same name plus free's over beats by Premier, Alchemist, Hi-Tek and of course some original 88 Keys ish. Enjoy, and like I said make sure to bang that Buckwild joint with the volume UP!
88 KEYS PRESENTS... LOCKSMITH MUSIC
Posted by lost.tapes.claaa7@gmail.com at 12:44 AM