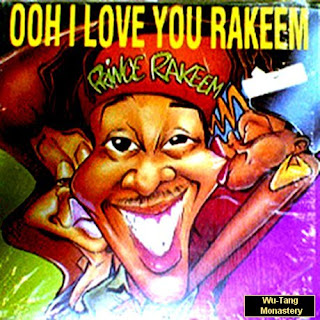 Probably the biggest rap group of all time is the nine piece crew from Staten Island known as Wu-Tang Clan who between 1992 and 1997 seriously infiltritated the record industry like no one before them. First hitting with a group putting them on the map they followed with solo projects from six of the group's most prominent member's sall brilliantly produced by The RZA  p/k/a "Prince Rakeem". But before there even was a Wu-Tang, Clan, cousinss Robert Diggs and Gary Grice found themeselves signing  respective deals with Tommy Boy Records and Cold Chillin'. Grice, or The Genius, in '91 released his "Words From the Genius" LP on the C.C. label while Prince Rakeem released an eight track EP called "Ooh, We Love You Rakeem" the same year. Despite both releases spawning one minor hit each (Rakeem's title track and The Genius' "Come Do Me"),both releases were considred flops and they ended up being dropped from their deals.
Anyways, Diggs was very unpleased with the way he was being treated by Tommy Boy; he had little to no creative control aof his músic nd couldn't even choose the subject matter. He has often been quoted as saying that he was a rugged motherfuca back then sporting baggy hoodies and timb's, something the labael hardly approved of as they saw him as a "ladies man" resulting in a sound way to happy-go-lucky for his personal taste. His cousin The Genius had a similiar experience at Cold Chillin which was a blessing in disguise for them both as these bad experiences lead the two to gather the finest emcees in their home borough of Staten Island to make it on their own terms. And the rest is, as you know, history...
"Ooh We Love You Rakeem" is quire the typical commercial rap song from the early '90s with RZA rhyminga laundry list of all the sweet chicks he's dated while growing up. It's a typical self produced party record for its time with glaring trumpet, a melodic bassline and the occassional scratches during the verses. A funny fact is that the A-side actually sounds a little like a De La record; this is no coincidence being that Prince Paul was something of a mentor to the young producer at this time. In fact , Paul even programmed the drums on the single. For what it's worth, is it's actually a pretty good reocrd if you take it for what it is - something totally unrelated to anything Wu-Tang!
The B-side is, at least to me, the more interestng song on the EP. "Sexscapades" is another jam about the ladies produced and arranged by none other that the legendary Easy Mo Bee who provides the Prince with a more agressive sound that's heavy on the funk and points forward to the future and the Wu-Tang Clan; This rings especially true on the the aptly titled "Wu-Tang Mix" with is even edgier than the original (DMD) version. Last but not least, the single includes a bonus cut called"My Deadly Venoms" which also features traces of what was to come with asian sounding samples, guitar breaks and of course RZA's unmistakable off-kilter delivery.
Prince Rakeem's Tommy Boy debut is not a wack record, but it is one of those fairly standard singles that were produced excessively and was the popular sound of the day between 1990 and 1992. Had it not been for what happened further down the line the single would have been totally forgotten by now. However it does have several signifcant tradesmarks that mkes it an important part of The RZA's legacy; not only is it the single that fueled his venegance against major record labels, it was the seed for The Gravediggaz and Wu-Tang Clan and it was the first time Diggs worked with both Prince Paul and Easy Mo Bee - two producers who would both play supporting roles in his career as one of the greatest of all time. Have you not yet heard this EP, then it's really about time you do so; it's actually remotely interesting in its own right, so sit back, grab a blunt and let the World According to Prince Rakeem & Tomnmy Boy take you on a journey to a slightly cheesy hood Playboy Mansion.
01. "Oh, We Love You Rakeem" [Baggin' Ladies Mix]
02. "Oh, We Love You Rakeem" [Baggin' Instrumental]
03. "Deadly Venoms" [Vocals Up]
04. "Sexscapades" [DMD Mix]
06. "Sexscapades" [Wu-Tang Mix]
07. "Sexscapades" [DMD Instrumental]
08. "Sexscapades" [Wu-Tang Instrumental]

PRINCE RAKEEM - "OOH WE LOVE YOU RAKEEM"
Posted by lost.tapes.claaa7@gmail.com at 6:57 AM