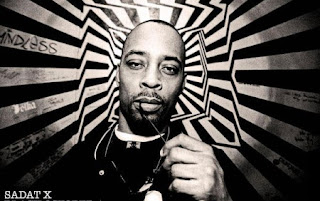 Even though I think the Brand Nubian legend is kinda overflooding the market I am always up for some new music from the X-Man. He hasn't really released a near flawless album since 2005 but all his later LP:s has at least featured a bunch of bangers and there's been plenty of hot loose joints appearing on the net throughout the last couple of years.
Today no less than two songs from Derrick X has been made available; the most interesting being The Beatnut's Psyco Les produced "X & Sandman", a collaboration with Stones Throw's Homeboy Sandman. The second track of the day, "Here I Am", and is a solo X record produced by his long-time affiliate AG's producer; Mike the Martyr. Enjoy!
SADAT X / HOMEBOY SANDMAN - "X & SANDMAN"
SADAT X - "HERE I AM"
Posted by lost.tapes.claaa7@gmail.com at 8:25 AM