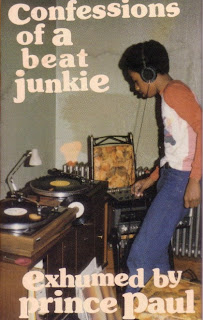 I figured this might be a good time to drop this sick mixtape by Prince Paul called "Confessions Of A Beat Junkie" which you can throw on as the perfect background music while checking out the Complex article in the post below. The 35 minutes tape was released by Tommy Boy around 1998 in promotion of Paul's solo work for the label. It's a great look at both his production work and his skills on the wheels of steel as he mixes a bunch of his classics mixed with crazy skits (including choice words from his family and friends), unreleased joints and rare B-sides. In other words a must hear for any fan of the man. I'm not sure who originally posted this great sounding tape rip but I got it from Nerdtorious who writes "word to Cutso for the tape!" so shouts to them. Here's a few words on the project from the producer himself:
"Thanks, I’m glad you enjoyed the tape. I made this for Tommy Boy as a promo item in the late ’90s to reintroduce myself to the public. It was to launch off the reissue of Psychoanalysis and a new project, A Prince Among Thieves. I just wanted to make something different from the old traditional mixtape that was out at the time. I had my friends and mom do little intro pieces to the songs.
I wanted to make it appear like I was this elusive, eclectic guy, and they were describing my work to those who weren’t familiar with me. The photo [on the back] is a picture of my son when he was about 3 or 4. He was always facinated with the turntables now he’s a DJ himself at 17. I put a lot of work into that tape, I’m glad that it’s still being enjoyed."

DJ PRINCE PAUL - "CONFESSIONS OF A BEAT JUNKIE"
Posted by lost.tapes.claaa7@gmail.com at 4:31 AM