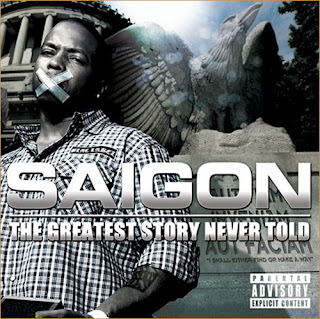 Few albums could to build up the hype “The Greatest Story Never Told” did. Saigon’s few singles and guest verses leading up to the album spoke for themselves and any album produced by Just Blaze should be worth your money, right! First promised in 2006, fans had to wait five years more before The Greatest Story was finally told. So was it worth the wait?
The majority of Saigon and Just Blaze’s long-awaited album does not disappoint but at the same time it could have appeared higher than #10 on this year-end list. When it’s good it’s absolutely amazing, both as for The Yardfather’s performance and Just Blaze’s blazing production. What drags it down a bit to me is a bunch of songs that unfortunately can’t live up to the high standards of the larger part of this project. This made “The Greatest…”’s impact lesser than it should’ve been. The reason that some of the tracks didn’t meet the high expectations was the extreme amount of hype that had been built up throughout the years coupled with some cheesy hooks that didn’t at all fit the vibe of the album. Add a few beats that were skippable and the album, which should and could have been flawless, instead only manages to come close to the perfection many had hoped for.
On a positive note though, Sai’s lyrical performance was nothing short of brilliant throughout the whole project; brutally honest, heartfelt delivery, clever metaphors, important and well-executed concepts and overall great songwriting. Tracks like “The Invitation”, “Oh Yeah (Our Babies)”, “Better Way”, “Preacher”, “Greatest Story Never Told”, “Come On Baby”, the brilliant two-part concept in “Friends” and “Enemies” more than made up for the less inspired songs. His voice is distinct and outstanding and he knows exactly how to captivate the listener and now with Just Blaze by his side he clearly got a bright future. Just and Sai’s chemistry are as amazing as some of the best MC/producer duo’s out there; they both bounces off eachother and bring that much needed street element to their music here. Just chops samples like a true champ, dwelling deep in the soul records crates to ushers Sai’s ghetto tales in dreams of high-pitched gospel and hard R&B; and always with the real heavy drums on top. And you can count on it sounding so damn good!
I’m still waiting for a proper vinyl edition of this album so in the meantime I’ve been banging my own iPod version since it first leaked and it’s one of the few albums that haven’t been deleted it since it was first added. The version I bump is slightly modified though; instead of the 17 tracks on the CD I bump a tracklist of 11 songs (including the intro and “The Winner Is…” outro). This shorter edition makes for an absolutely mind-blowing, close to perfect front-to-back listen that’s reminiscent of old rap classics that featured 9-12 tracks over about 45 minutes time.
So in closing, the production is fantastic; Saigon is fantastic with the execution of concepts and that remarkable delivery and distinct voice proved that he’s one of the most charismatic emcees to emerge in quite some time and if he can make his next album even more focused (like making it 45 minutes rather than 78) it will probably be the classic I now know he has in him.
Posted by lost.tapes.claaa7@gmail.com at 4:06 PM