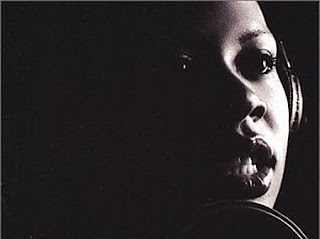 It's now almost been a full decade since we last was blessed with a full-length album from monstrous femcee Heather B.In 2002 she released "Eternal Affairs", a relatively neat LP that featured production by DJ Premier and Pete Rock but her real crowning achievment was her 1996 debut "Takin' Mine"; fully produced by BDP's Kenny Parker. Between '96 and now she has dropped several quality verses via various cameos and soundtracks, proving she's still one emcee you certainly wouldn't want to battle.
I'm glad to announce that brand new Heather B. material is currently on the way and we already got a few sneak peaks of what to expect which you can check out at the bottom of this post. A mixtape entitled "Spit Queen" is on the way but what we're really anticipating is Heather's new full-length album, "Open Bar"; eight years in the making and an executive producer credit to DJ Premier promises great things! Below you can peep three relatively new songs from the true Queen MC - "The Game Don't Stop" is laced by her original P.N.C. Kenny Parker, "Dreamer" and "Flying High" are both mixed by Preemo and the former is produced by Nottz Raw while the latter lacks a production credit (and has also been out for almost a year by now but for anyone who might've missed it, don't sleep). Enjoy these  bangers and many thanks to Chris Moss for sending these over to me!