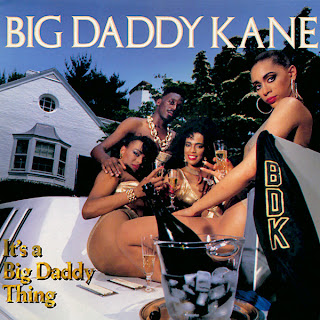 Prince Paul continues his unreleased series with the rough mix of the classic title song to the equally classic Big Daddy Kane album "It's A Big Daddy Thing". The album version sounds a lot better but it's always cool shit to hear some alternative takes like this of the ol' goodies. Paul also produced the song "Ain't No Stopping Us Now" from the same album but this was apparantly the first thing they ever laid down in the studio, check the words from the sonic master before we get into the music:
"This is a Song I did for Kane in 1989 which is the title track of his album "It's a Big Daddy Thing". At this point in my career this was a big highlight to work with Kane and there was definitely a mutual respect for each others talents . This was our first time working together and I have to say Kane is truly genius a funny guy and a pleasure to work with . Listening back to this song I really wish I could have made the production better . Keep in mind this was just a rough mix , the better mixed version is on the album."
"ITS A BIG DADDY THING" BIG DADDY KANE 1989 PRINCE PAUL DEMO MIX by DJ Prince Paul
Posted by lost.tapes.claaa7@gmail.com at 9:19 AM