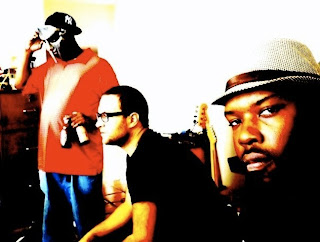 Not too long ago we heard a sick collabo between the Supervillain and two members of Radiohead on a cut called "Retarded Fred". The song was lifted from a forthcoming project called "Complex" which will celebrate the tenth anniversary of indie label Lex Records. Turns out that the compilation will feature another MF DOOM joint as he here teams up with producer Jnerio Jarel  (a/k/a Dr. Who Dat?) as JJ DOOM. The song has been remixed by Dave Sitek from rock band TV On The Radio and is titled "Rhymin' Slang". Spotted @ Pitchfork.

Email ThisBlogThis!Share to TwitterShare to FacebookShare to Pinterest
Labels: DOOM