In 1998 P-Jay Records released a 12" single featuring the two tracks "Hidden Crate" and "Hold Mines" with an artist labeled as The Giant. These were both slamming solo tracks by D.I.T.C.'s AG and both produced by talented DJ Greyboy who provided a sinister but laidback BX sound which perfectly mirrored A's style. In fact, it seems that the artist were so pleased with these joints he and Show even included them both on the CD reissue of their "Full Scale EP" in 2002.
Apparantly they even recorded a music video for the A-side "Hidden Crate" but it was first released about a week ago. I wonder if it's supposed to be so short, since it cuts off during The Giant's second verse, which is a shame since that is a classic AG verse (brilliant shit). The single included no instrumentals but only a street and a clean version for both tracks; both street versions also appeared on the CD I mentioned above but for those who might've missed these gems I thought it was a good idea to upload them together with the video. The video is directed by Ben Wolfhinson and the song produced by Greyboy and co-produced by Rob Dyrdek. 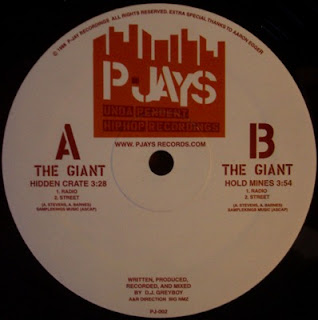