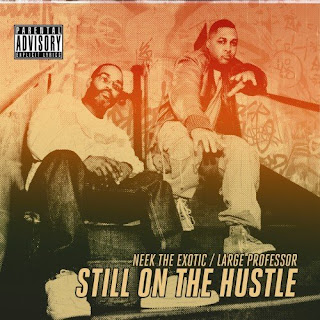 Queen’s rapper Neek the Exotic made his recording debut in 1992 on a soundtrack joint by Main Source called “Fakin’ the Funk”. This meant that a working relationship with fellow Queen’s rapper and super producer Large Professor was established. Since then these two gentlemen has collaborated on a number of projects, including mixtape joints, 12” singles and soundtracks. Although Neek never made an appearance on any of Extra-P’s solo releases doesn’t mean that the chemistry they always displayed isn’t something out of the ordinary as this year’s “Still On The Hustle” is a true testament of.
Although criminally overlooked, many fans of New York styled hardcore hip-hop rejoiced over Neek’s exotic street rhymes and The Mad Scientist’s soul infused bangers. Neither beats nor vocals are in the most technically difficult lane; instead the music is straight to the point and hits right where it’s supposed to, each and every time. Cries for the authentic sounds of that ‘90s true school music are silenced as soon as this is by far the most throwback sounding record in quite some time. As soon as Extra-P’s amazing sample manipulation of the title track’s beat kicks in, so does fond memories of hip-hops past glory days. Chopping up a melodic soul loop over a dusty drum and bass pattern and an infectious sampled vocal hook, Large Pro makes it clear that he’s still one of the five illest producers of all time. “Still On The Hustle” charges our emcee to reflect on his past and his present, spitting memorable verses with that distinct, ruff and grimy voice that creates a superior contrast to the soulful music. This is one of the things that constantly make their collaboration work so well.
The stylistic vibe provided on the abovementioned joint is obviously a winning formula and is wisely reprised on the majority of the LP; switching it up just enough to never let the music become stale or repetitive. Large Professor and Joell Ortiz, respectively, join Neek on the equally impeccable two-punch that is “Guess Who” and “Street Rebels”; a pair of typical throwback boom bap headnodders that are some of the absolute finest music I’ve heard all year. The same can be said about “My Own Line”, one of two Marco Polo productions, and the piano driven “Head Spin” where the emcee carves out his own little niche in the game with several memorable quotables. The two mentioned songs are also the ones that take something of a left turn as they are far darker and sinister than the soul drenched music the rest of the LP has to offer.
As great as the album is, it does have its flaws which could easily have been fixed by pushing it back for just a few months. First of all the record is credited to Neek the Exotic and Large Professor so why shouldn’t we expect a full collaboration between the two? Out of the eleven featured songs, Extra-P only provides beats for six of them – in other words just over half of the music. These six joints are all straight fire and together with his own “Key to the City” 12” and work on Torae’s album, I feel confident in saying that The Live Guy Wit’ The Glasses deserves the producer crown of the year.
Marco Polo’s and Lord Finesse’s guest beats are similarly fantastic and has the same hardcore hip-hop sound that goes so well with Neek’s deep vocal tone. However, a young beatmaker named Carnage provides music for “New York” and “Stack That”; two songs that are not bad but compared to the contributions from the three A-list producers they stick out like a sore thumb on an otherwise incredible piece of work. Of course two joints out of eleven aren’t enough to really drag down an album full of dope beats and rhymes. But when you are supposed to get an album full of Large Professor beats, Carnage’s work just don’t cut it. Add that to the fact that the whole record clocks in at only 35 minutes and it’s clear that there’s no room for any mistakes at all.
To be fair though, there’s really nothing wack on the Fat Beats release that is “Still On The Hustle” so the abovementioned statements is basically nitpicking. Neek the Exotic with the help of Large Professor has here created one of the albums of the year; a record you can enjoy from front-to-back that easily has earned its place in the record collection of any lover of that mid-‘90s sound with a modern twist. Don’t sleep!
Posted by lost.tapes.claaa7@gmail.com at 6:27 AM